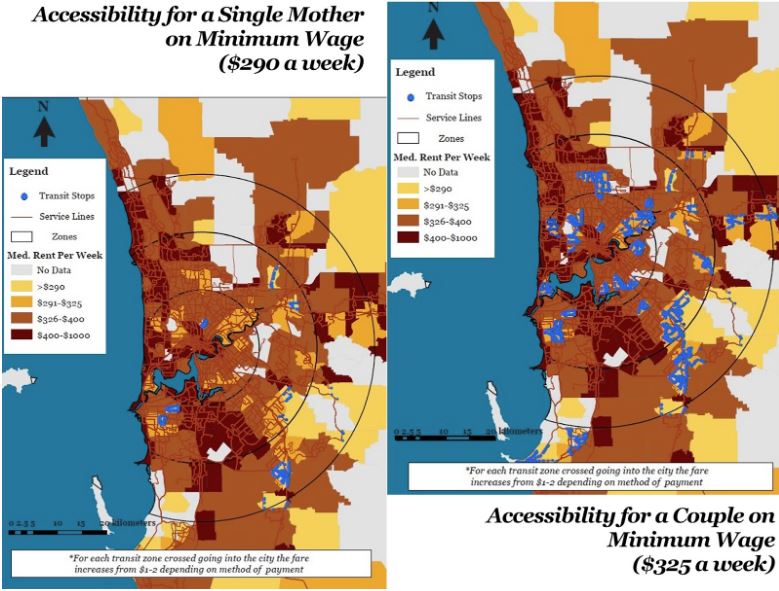 These two maps outline the accessibility to equity in the Perth Metro Area in Australia. Perth, located in Western Australia, is known as one of the most isolated cities in the world and consists of a population of nearly two million people. As it has little boundaries, much of the city has resulted in urban sprawl, with the city expanding into the desert east. While Perth is known as one of the more affordable Australian cities to live in, the city has been facing a rental affordability crisis for the pasts several years.

In order for a rental property to be deemed ‘affordable’ it must cost no more than one third of one’s monthly pay. In a rental affordability snapshot done by Anglicare WA earlier this year, the non-profit outlined different demographics of people who are most disadvantaged by such high rental prices. These two maps attempt to look at two of the decographics laid out by this snapshot; a single mom working minimum wage that can afford up to $291 a week in rent, and a couple that work minimum wage that can afford up to $325 a week in rent. Many of Perth’s higher paying jobs occur near or around the Central Business District, located in the city center. These maps look at suburbs within 40 kilometers of the Perth metro area that contain median rents of these prices and overlays them with transit data in attempt to answer the question: is public transportation accessible to the lower income populations who need it most?

The answer becomes quite clear within both maps, particularly the single mother that can only afford to pay $290 a week on rent. Not only are there few neighborhoods that contain a median rent price this low, but many are scattered on the outskirts of the city where transportation service lines and stops become scarce. While the accessibility goes up as shown with the couple on minimum wage, it is still evident that the density of transportation lines run within more affluent neighborhoods. This means that either people would have to pay more to reside in wealthier suburbs, paying more for rent simply to achieve fuller access to the public transportation services they need in order to get to jobs and receive opportunities that are often times the key to rising in social classes. Ultimately the maps show a lack of accessibility to equity in the Perth Metro area to those who need it the most.