Reuters recently put together interactive graphics explaining the evergreen economy. Last year, over 26 million evergreen trees were sold in the United States for the holiday season, making evergreen production a $2 billion industry. According to the USDA, about 300,000 acres of land is allotted for the production of evergreen trees, the majority of which are grown in Oregon and North Carolina. Of the trees sold, over half were harvested in just 7 counties across the U.S. 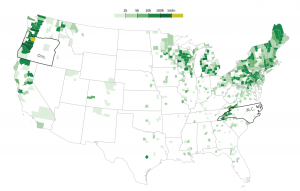 The average price for an evergreen tree was just under $80, similar to the tree prices in recent years. Fraser Firs were the most popular tree species purchased in 2019, with the Noble Fir and Douglas Fir as the second and third most popular trees bought.

While still not as lucrative as real trees, artificial tree demand has also increased in recent years. In 2018, over 23 million fake trees were sold compared to the sales of almost 33 million real trees. 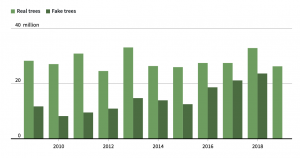 So which is better for the environment – real or fake?

According to The Nature Conservancy, artificial tree production has a much larger carbon footprint than harvesting real evergreens, and most end up in landfills. Purchasing real trees not only minimizes carbon emissions and waste, but when harvested sustainably, they provide a healthy forest habitat for wildlife. For every tree purchased, about 3 more are planted, meaning contributing to the evergreen economy is more beneficial to the environment and to the farmers that harvest them.

Check out more on the economy of evergreens by going to: https://graphics.reuters.com/USA-ECONOMY/CHRISTMASTREES/xklpyjerbvg/.