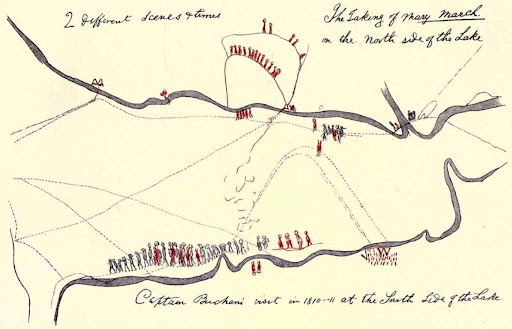 As we kick off the beginning of Women’s History Month this March we bring you a map of an untold story of the Canadian Beothuk tribe from female cartographer Shawnadithit. Born in Newfoundland in 1801, Shawnadithit’s childhood with her Beothuk tribe was cut short as she witnessed her own people intentionally driven to extinction by the British Marines. She survived against all odds and “eventually became known as the last “full-blooded” member of her tribe”, the last Beothuk left to tell her people’s stories. 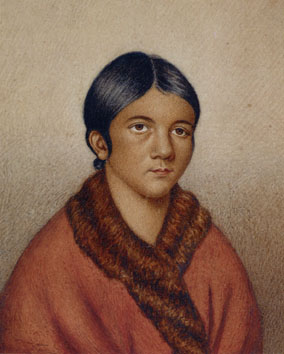 In her twenties, Shawnadithit found work as a servant in a white settlement. It was there that the explorer William Cormack, who was working to found a center devoted to Beothuk history, took great anthropological interest in Shawnadithit. After learning English, she recited her tribe’s stories to Cormack, however she showed a greater affinity for drawing.

In 1829, Shawnadithit created five narrative maps of the lake where her people made camp in central Newfoundland, today the lake is known as Red Indian Lake. Her maps showcase the Beothuk movements and European conflicts from eighteen years prior. The drawings contained incredible geographical accuracy and signified the last accounts of the Beothuk people in Newfoundland. Her stories, maps and beliefs she shared after her devastating childhood have become a symbol of a chapter in Canadian history marked by tragedy.

The map above depicts the capture of Shawnadithit’s aunt Demasduit, whose English name was “Mary March.” It is labeled “The taking of Mary March on the North side of the lake.” The Beothuk people are drawn in red, and their British aggressors in black. The map depicts the North East Arm of Red Indian Lake. In the south, a British party under Captain Buchan marches in single file and four Beothuks approach to kill two marines. Mary March is drawn in the smaller group of British on the ice above the marching marines. The red body in a different position in front of them is representative of Mary’s husband lying dead on the ice after being shot in an attempt to rescue her.