Flooding is the United States’ costliest natural disaster. After high temperatures, in terms of human fatalities, it is the second largest weather-related hazard in the U.S. Sea levels are continuing to rise, sea surface temperatures are continuing to increase, and the atmosphere continues to warm, which are causing an increased risk from flooding as it becomes more frequent and severe. Flood Factor is a free online tool created by the non-profit First Street Foundation that allows American property owners to see the current and future risk of flooding in their locality. It also gives an account of previous flooding in the area, and gives an understanding as to how flood risks are changed because of the environment.

The above map shows the projected change in extreme rain events in 2050 compared to the average between 1980 and 2010. The database also gives projections for 2020 and 2035, on the expected change in intensity, as measured by how much precipitation occurs in a short interval. The thirty year period between 1985 and 2014 averaged a cost of $8 billion per year in flood damage to properties and communities across the United States. Extreme rain events are becoming more frequent as the warmer atmosphere is enabling more evaporation, allowing for an increase in their duration and intensity. 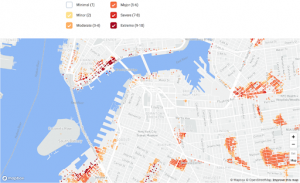 This map looks at Brooklyn Heights and the surrounding areas in New York City, where our offices are located. It shows the comprehensive flood risk, from minimal to extreme, of properties in the area. The database acknowledges previous flood damage from Hurricane Sandy and Hurricane Irene while also noting that there is an increasing risk of further flooding in the years ahead. The database also explains the importance of adaptation within communities to limit damage and lower flood insurance costs while giving a list of solutions that could be implemented to protect an area. 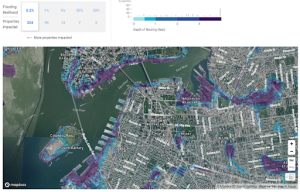 This final map shows the projected flood risk of Brooklyn Heights and its surrounding neighborhoods in 2050 if an event similar to Hurricane Sandy was to impact the region again, with a projection of the likeliness of flooding and the impact on properties. It shows the areas that could experience up to three feet of flooding, while also acknowledging the protections that are in place in the area against rising water levels and in this instance, levees are in place along the East River to protect people and properties.

Flood Factor is the first of its kind model that shows how risk changes over time. The database has analyzed over 142 million properties, neighborhoods, and cities, and uses data calculated by a team of more than eighty world-renowned experts using decades of peer-reviewed research.