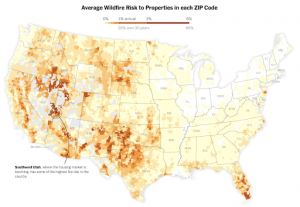 This map depicts the data produced by First Street Foundation broken down by zip code. Graphic produced by the NYTimes.

Recently published research from the non-profit First Street Foundation has provided a risk assessment for properties based on wildfires. Many properties are already mapped by FEMA and other federal agencies in accordance with disaster risks, but limited data has been published to measure the risks posed by wildfires.

The fire risk map above shows a fascinating regional trend, partly caused by physical geography, but also by the massive population growth across the western United States. According to the 2020 U.S. Census, 5 of the fastest growing states are in the American West, with Utah at #1 with a whopping 18.37% growth rate from 2010 to 2020. This population growth spells trouble for wildfire risk due to the make up of what environmentalists call “the wildland-urban interface.”

The wildland-urban interface (WUI) is an area where human development and residential areas meet and intermingle with undeveloped wilderness. While this interface is a reason for increased interaction with wildlife such as bears and deer, the U.S. Forest Service argues that the widening of the WUI has significant implications for wildfire management. Housing growth has outpaced population growth in the United States, leading housing developers to look towards increasingly wild areas for development. Because the largest population growth in the United States is occurring in states with a large percentage of public wildlands within their boundaries, the WUI is expected to increase as developers race to meet booming populations’ needs.

Wildfire risk is only expected to increase in the coming years as the fire season in the United States grows longer and longer. Furthermore, according to 2022 data from the National Interagency Fire Center, “wildfires have burned 1,780,488 acres in the United States…Well above the 10-year average.” 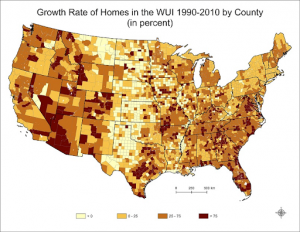 This U.S. Forest Service map shows the growth rate of housing in the WUI for U.S. counties from 1990-2010. An updated map with 2020 census data is expected to be produced soon.

An interactive FEMA database has even further documented natural hazard risks for every county in the United States. In their database, a similar regional trend is indicated. Most high risk counties are located in the American West, although major urban areas and pockets of the American South stand out as well. Find out more about the map here.

What’s the wildfire risk in your zip code? Check it out here.