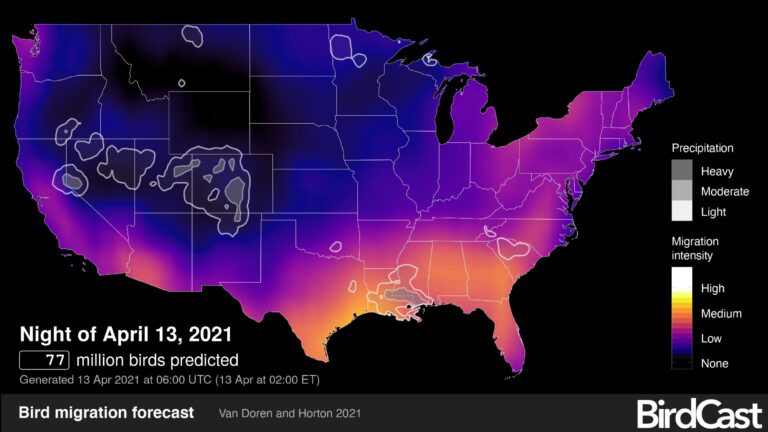 Bird-watching was a rare bright spot for many people during phases of lockdown and quarantines, and initiated a boom in the hobby that continues today. This newly found fascination with the avian species who live and transit our communities has bolstered conservation efforts and produced a wealth of new data on bird habits and patterns. The map above from BirdCast should bring some succor to those itching to break out the binoculars and get back outside following a frigid and stormy winter.

Using a combination of U.S. surveillance weather radar systems, machine-learning techniques and crowd-sourced data, the collaborators at BirdCast forecast 3-day bird migration paths, provide local bird migration alerts, and maintain a live bird migration map of the United States showing real-time nocturnal bird movement, as night is the primary travel time for birds. These tools became available online in 2018 after almost two decades of research and development by the Cornell Lab of Ornithology, Colorado State University, University of Massachusetts at Amherst, among many other universities and contributing partners.

Originally developed during World War II to detect aircraft, radar (an acronym for radio detection and ranging) is most often associated with meteorology, used to forecast daily weather and track storms. Because radar detection collects information about anything in the atmosphere that scatters pulsating microwaves back to the source, analyzing this data for weather or military applications requires advanced filtering and processing to distinguish between the various objects and phenomena that share the same sky.

In wartime, radar targets that could not be identified were called “angels,” and ornithologists of the time determined birds and bird movement were often the cause of these mysterious readings. However, it was not until significant advances in computational power and improved technologies could the field of ornithology begin to interpret and utilize the troves of data collected by radar systems. Today, sophisticated algorithms are generally able to separate distracting data in radar used for meteorological purposes, though some biological data remains difficult to filter and was not historically used in weather monitoring. Applying their own analysis to this “discarded” data and examining weather surveillance radar archives, researchers at BirdCast were able to develop algorithms and models to track migration patterns and differentiate birds from precipitation and bats or insects.

This predictive technology has applications beyond alerting those on the ground to unique species passing through their parks and backyards. Collision into buildings is the second-leading cause of death for migratory birds, primarily due to the plethora of distractions caused by artificial light in urban structures that disrupt these largely nocturnal journeys.

A 2021 study found that decreasing illuminated lights by half at a large Chicago convention center led to 11 times fewer collisions, and suggests that merely dimming nighttime lights during migration peaks could bring the death numbers down by 60%. New York City passed the ‘Lights Out’ bills in December, which will reduce overnight lighting in city-owned buildings, joining 33 other U.S. cities to prevent hundreds of thousands of bird collisions. 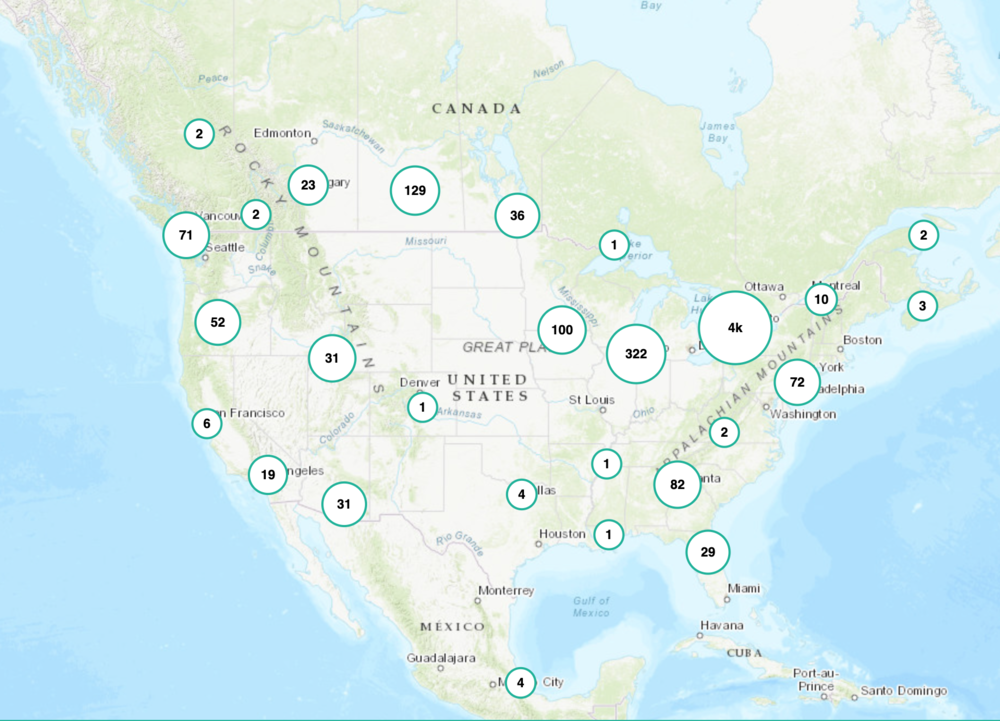 The map above was taken from the Global Bird Collision Mapper app. Users can explore the data and enter locations to search for recorded collisions in specific sites.

Researchers are also using radar data to understand how climate change is affecting migration routes and patterns, highly synchronized and delicate events where even shifts of 48 hours can mean life or death. There are also clues to answering some of the fundamental questions that still fascinate ornithologists, such as how birds navigate and how they survive the incredibly long treks. For example: Arctic Tern’s heroic flight from Arctic to Antarctic. In the Spring, Arctic Terns migrate North to their breeding grounds (shown in red on the migration map). In early Fall, they fly back South to the Antarctic region where they spend the Winter (blue). Source: www.go2moon.com

The work of forecasting and tracking bird migration does not end with radar and sophisticated algorithms. On-the-ground reporting is still critical to this science. BirdCast integrates radar data with field observations from eBird, an app and online database used by scientists and amateur naturalists alike which provides real-time data about bird abundance and distribution. In fact, these crowd-sourced mapping tools are necessary to not only test predictions and track movements, but to further develop technology and models such that particular species can be identified and more finely geolocated.

So, whether you’re new to the bird world or a committed twitcher, there’s many fascinating ways to explore what’s happening just above our heads and submit valuable data while witnessing the majesty of seasonal bird migration.