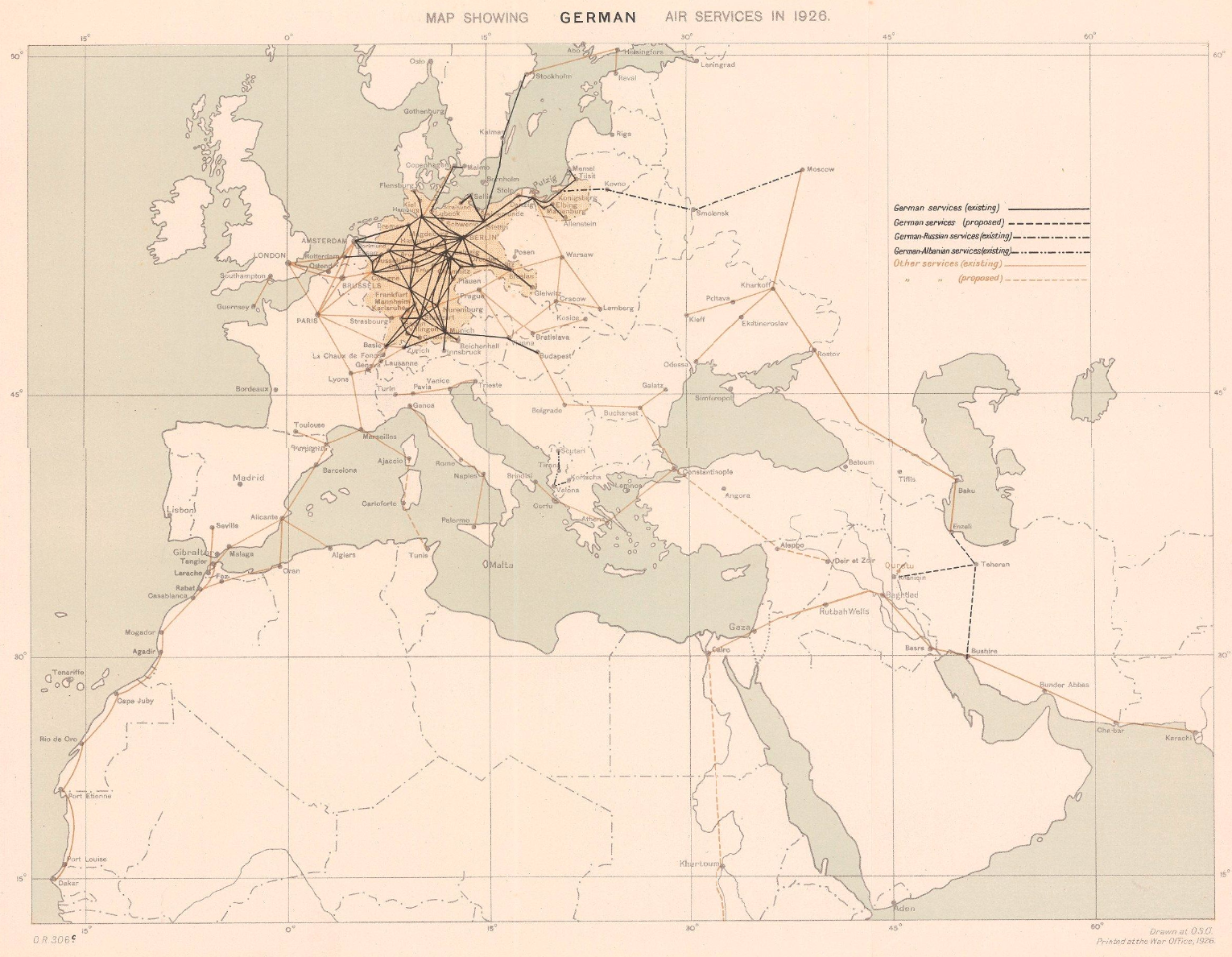 Titled, “German Air Service in 1926”, the map above illustrates the early history of commercial air travel within Germany. Here, we can see the extent of flight pathways that are either already in existence or proposed for future use in Germany during this time period. Interestingly, this map was not published by Germany itself, but by the United Kingdom under the governmental department, War Office, which operated between 1857 and 1964.

From the map above, we can see most of the flight paths in 1926 are surprisingly short for our modern sensibilities, with most flights flying between and within regions of Germany; this would mean that most flights would only travel a couple hundred miles at a time. Planes from this era generally flew at speeds around 100 miles per hour, had to stop to refuel often, and could only fly during the day. In contrast, commercial planes today cruise at speeds around 500-600 miles per hour and can fly about 10,000 miles before needing to refuel.

Germany has a particularly interesting history of commercial air travel, with its novel use of airships (also known as “blimps”) to transport wealthy civilians from one city to another between 1910 and 1921. This service, provided by a company named DELAG (Deutsche Luftschiffahrt Aktien Gesellschaft), is considered by some to be one of the first passenger airlines in the world. During the same time period, airplanes began to surpass airships in popularity due to shorter travel times and practicality; in 1937, the catastrophic disaster of the Hindenburg airship in 1937 caused airships to be discontinued entirely. For more historical context, Germany (and most of Europe) post-World War I were eager to repurpose military aircraft for civilian use. The Weimar government, which was in power after WWI, was also quite supportive of the expansion of civilian air travel, with up to 70 percent of the industry being funded directly by the government.

Overall, old maps like these are valuable for their historical contexts and their ability to capture progressions in technology since the time of being published. When looking at modern maps on the topic, it is incredible to compare how numerous and long flights have become. To see a map depicting over 58,000 air traffic routes, click here.