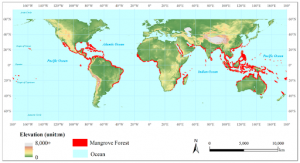 Mangrove forests, also known as mangrove swamps, are a group of trees or shrubs typically seen in tropical and subtropical coastal intertidal zones. Mangroves are well recognized for their diversified ecological functions including runoff and flood prevention, stabilizing the coastline, reducing erosion from storm surges and currents, carbon storage, and so on. The distinctive and intricate root system of mangroves provide food and shelter to fish and other organisms. Mangrove forests account for only 3 percent of Earth’s Forest cover, a total loss of which can result in up to 10 percent increase in global carbon emissions.

In 2010, mangroves were found to be aligned along 13,727 square km (53,000 square miles) of Earth’s coastlines, in the tropical and subtropical latitudes, mostly in Southeast Asia. 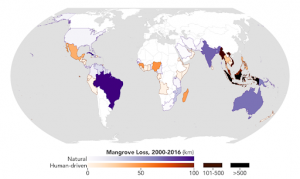 The map illustrates the areas of mangrove forest loss from 2000-2016 incurred due to human to natural causes. The darker the color, the greater the loss.

However, for the past 50 years, 20%–35% of mangrove forests have disappeared. Mentioned earlier, from 2000-2016, about 1,300 square miles of mangroves have been lost. Furthermore, the annual loss rate is between 0.26 and 0.66 percent loss per year. More than 62 percent of total losses were instigated by human activities (i.e., agriculture, aquaculture) and the rest from natural processes (i.e., erosion and extreme weather events). Especially in Southeast Asia, mangroves are destroyed for agriculture and aquaculture developments, timber production and urban development. Nonetheless, the pace of mangrove forest cover loss has declined since 2005 compared to the years of 2000-2005. Both anthropogenic and natural causes of mangrove loss have lessened over time, however, the influence of nature is still prevalent.

Recognized global organizations like Conservation International, the International Union for the Conservation of Nature (IUCN), and The Nature Conservancy have teamed up to introduce the Global Mangrove Alliance, an initiative to restore the global mangrove area by 20% by 2030. The alliance requires the collaborations of funders, experts, and local communities to conserve and preserve mangroves.