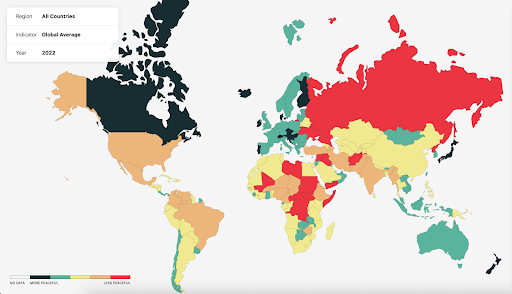 The Global Peace Index (GPI), produced by the Institute for Economics and Peace (IEP), is the world’s leading measure of global peacefulness. The GPI covers 99.7% of the world’s population and measures the state of peace across three domains: the level of Societal Safety and Security, the extent of Ongoing Domestic and International Conflict, and the degree of Militarisation. The data collected by the IEP has been visualized on the map above, which shows each country color-coded by level of peacefulness.

The 2022 GPI produced some key insights and trends for the year :

In terms of which countries were ranked most to least peaceful, Iceland remained the most peaceful country – a position it’s held since 2008. Iceland is joined at the top of the ranks by New Zealand, Ireland, Denmark, and Austria. Seven of the ten countries at the top of the index are in Europe, with Turkey being the only country in Europe to be ranked outside the top half of the ranks. At the bottom of the index, ranking as the least peaceful country for the fifth consecutive year, is Afghanistan. Yemen, Syria, Russia, and South Sudan all preceded Afghanistan in the lowest ranks. This year’s index also noted the impacts of the War in Ukraine on peacefulness, citing both Russia and Ukraine as two of the five countries with the largest deteriorations in peacefulness.

The 2022 GPI also shed light on a world in which many countries have begun the process of recovery from the shock of the COVID-19 pandemic. However, that’s not to say many of the ramifications of the pandemic don’t remain. Supply chain disruptions and delays, product shortages, as well as higher energy and food prices are just a few examples of the disturbances countries are still healing from. With the highest levels of inflation in forty years in some countries, and no improvement in sight, many countries are still suffering. The rise in food and fuel costs has resulted in global increases in food insecurity and political instability, with Africa, South Asia, and the Middle East being under the greatest threat.

As you can see, there are many factors that can contribute to or detract from the level of peace in any country. Take a look at the 2022 GPI Map and find out where the country you live in falls on the global peace scale.