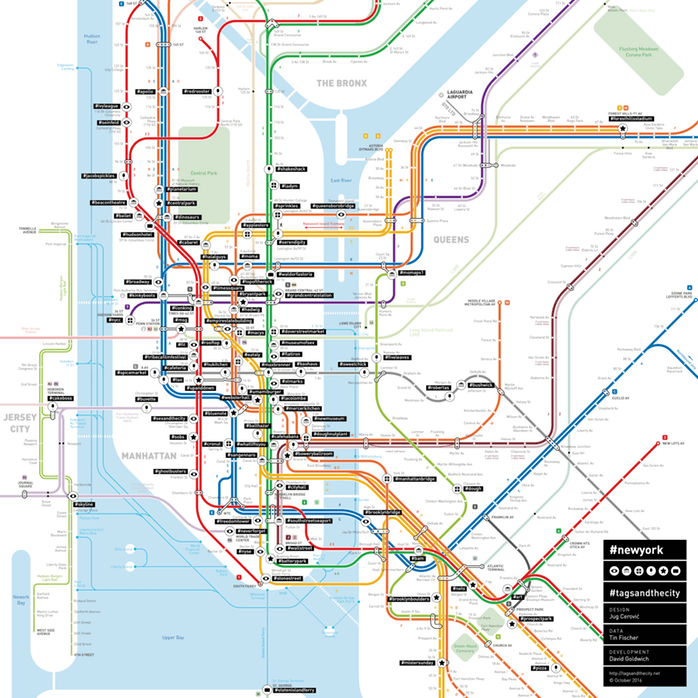 If you have ever used any social media platform such as Instagram or Twitter, then hashtags are probably no stranger to you – everyone is using them nowadays to not only organize their posts but also reach out to more people with similar “interests.” However, have you ever wondered what hashtags everyone else is using these days? Well, Tags and the City is your answer. A group of people – journalist Tin Fischer, software engineer David Goldwich, architect and mapmaker Jug Cerovic, and graphic designer Andrea Rohner – created a site that features transit maps from New York, Berlin, Paris, and the San Francisco Bay area, with the most popular Instagram hashtags labeled near each station. Originally, Fischer was curious about which season had the most rainbows and used the hashtag #rainbow to track their occurrence on Instagram. However, he soon found out that Instagram’s hashtag data is extended farther than just rainbows. “Instagram gives us a really good picture of how people live, eat, celebrate or travel these days,” Fischer said in an email. “We wanted to apply this information to a geographical grid that everybody has in his or her mind when moving through a city. This is, of course, the subway map.”

The intersection of cartography and social media brings a fresh perspective on how people are viewing the city – not only for first-time visitors, who may better orient themselves in a new city through this website but also for residents, who may find places they have never encountered before. The team has created interesting subway maps of Berlin, New York, London, Paris, and the San Francisco Bay Area. Interestingly enough, by looking at hashtags from different cities, an understanding of the “trending” topics of hashtags in each city can be observed – New York’s map essentially outlines food trends, the Bay Area is fond of Blue Bottle Coffee and Philz, Shake Shack is popular in London, and the Parisians love  cultural landmarks more than food.

On Reddit, the creators explained their methodology. They basically chose the hundred most popular stations on Instagram. Instead of using the original name of the station, they calculated the most significant hashtag used around each station within 300 meters. However, if the hashtag result is either just the station’s or the neighborhood’s name, or referred to a temporary event which may not happen every year at the same place, they would go for the next one. The final decision is made when the hashtag had a minimum frequency of 100 (each photograph counts as one). Users are suggested to zoom in on to the map and observe what is interesting at each subway station.

If you look closely enough, you will probably notice that some of the hashtags, such as #kinkyboots in New York City, are outdated. That is because Instagram has stopped providing the same level of geographic information since 2014, which makes it almost impossible to make new maps or update the old ones. Still, when the company Bustle asked what city is next on the list in an interview, Fischer said “Maybe Barcelona? It has an interesting mix of historical buildings, very different restaurants, beautiful views, mass tourism, but also subculture.” City maps are handy when it comes to traveling or navigating the subway system, but they tell us so little about the character of a place and how people use it. This creation by Tim Fischer and his colleagues, is a great example of how a functional map can be uniquely executed.