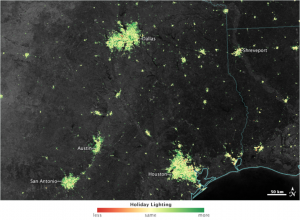 With the holiday season upon us, this week’s Map of the Week looks at the significant changes detected in the amount and distribution of artificial lighting during the holiday season in North America. A study, by a team of scientists from NASA’s Goddard Space Flight Center, led by Miguel Román, has discovered that lights during the hours of darkness around many major cities in the United States shine 20% to 50% brighter because of holiday activities and festive light displays throughout the month of December.

The map above shows the comparative light signals from December 2012 and 2013 to the average light output for the rest of the 2012 to 2014 period in the large urban areas of Austin, Dallas, Houston, and San Antonio in Texas. The green color indicates where light usage increased in December, yellow marks areas of little change and any red coloring shows a decrease in the amount of light that was used.

The science team observed the light output from seventy cities across the United States and found that light intensity increased by 30% to 50% in the suburbs on the outskirts of major cities. The data appears to show that lights in downtown areas of cities also increase but not as much as in more residential suburban neighborhoods.

The data from the map is based on information from the Visible Infrared Imaging Radiometer Suite (VIIRS), located on the Suomi NPP satellite. The map below shows satellite imagery from the entire southwestern United States. Daily night lights data can provide a way of looking at how people use cities. The presence of lights can tell whether a building is being used or not and these patterns can now be seen from space – when, where, and how often we turn on the lights. 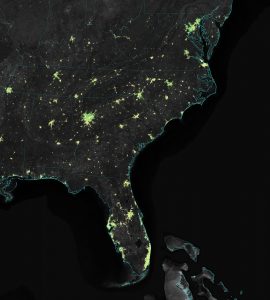