International Women’s Day was this past Monday, March 8th! To celebrate and recognize the hard work and dedication of women across the globe, this week’s Map of the Week is dedicated to the Women’s Power Index from the Council on Foreign Relations. The index ranks 193 United Nations member states based on their progress towards gender rights and female political participation. Proportions of female heads of government in national, state and local governments are also utilized to visualize the current gap in female political representation across the globe. 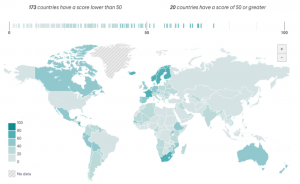 Additionally, only 22 countries currently have a female head of government, showing a stark disparity between male and female political leaders. Switzerland and Finland top the list for most national female leaders since 1946, having 5 and 4 respectively. Many countries, however, have yet to have any female leaders. In fact, over 50 of the nations ranked in the study have only ever had male leadership at the national level.

The Council for Foreign Relations also emphasizes the importance of female representation in government. Government bodies consisting of more than 25-30% of women are more likely to challenge societal norms and established policy agendas. Additionally having women in government creates more common ground, a larger platform for equality and social justice, and more stability across the nation. While electing women does not guarantee those outcomes, it is a first step towards increasing gender equality in politics.

For more information, check out the detailed data provided from the Women’s Power Index provided by the Council on Foreign Relations.