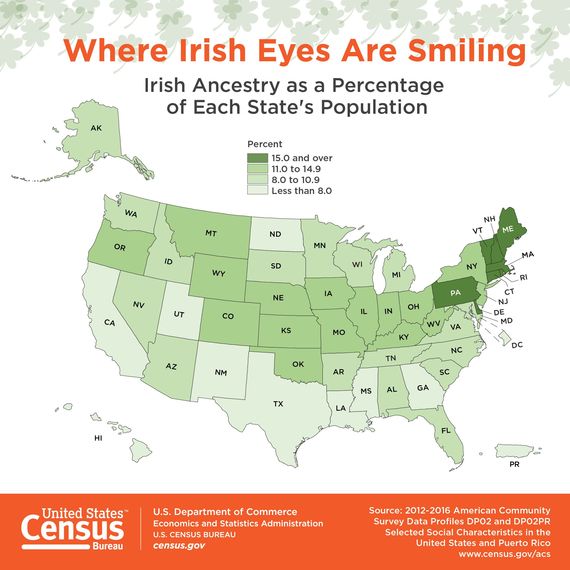 US Census Bureau’s study of Irish heritage in the USA.

It is estimated that between 1820 and 1930 over 4.5 million Irish immigrants came to the United States, and between 1820 and 1860 this represented one-third of all immigrants entering the country. This means that a large portion of our populace are descendants of these first Irish immigrants. When looking at the map we can see that these original immigrants were spread fairly equally around the country, but understandably, the majority of the Irish-American population is located on the northeast coast. This is largely attributed to the points of entrance for incoming Irish families at the original time of immigration. Massachusetts, Rhode Island, Pennsylvania, Maine, Vermont, New Hampshire, and Delaware lead the pack with an Irish-American population of over 15%, with the midwest coming in at a close second with Irish-American populations between 11% and 14.9% which was largely due to the land-grab emigration to the west as former Native American territories became available for American development after the Louisiana purchase of 1803.

This census map shows just how many U.S. citizens can trace their roots back to Ireland, which is amazing when looking at the current population of Ireland that is only 4.83 million people. With the next census knocking on our doors this year, we are expected to see these numbers rise to an estimated 34.5 million U.S. citizens identifying themselves as from Irish descent compared to the 33 million in 2017. This emigration has found roots in every state of the Union, every aspect of American life, and reaches from the Northeast coast of entry, all the way to the West Coast of California, Washington State, and Oregon.

For a little history of this celebrated day, St. Patrick who was the Patron Saint of Ireland, was credited with converting a large majority of the Irish population to Christianity in the AD 400s. St. Patrick has obtained a legendary status throughout the centuries, with a mixture of fable and truth, that has become quite obscured and almost impossible to decipher but continue to intrigue and interest those with Irish roots, and those without.