Earthquakes are a much more common occurrence than one might expect. According to the U.S. Geological Survey, there are, on average, over 14,000 earthquakes of magnitude 4 or greater every year, which amounts to approximately 40 per day. Every movement on the surface of the Earth is constantly monitored by a network of over 150 seismological and geophysical sensors. Therefore, when a new earthquake is recorded by any monitoring station around the world, it shows up on this real-time map using data from USGS earthquake data feed, created by a Mapbox designer, Peter Liu. The designer used GeoJSON, based on JavaScript Object Notation, an open standard format designed for representing simple geographical features along with non-spatial attributes. The features include points, line strings, polygons, and multi-part collections, which allow anyone to embed the code and present geographical features. In this case, the designer utilized the code to display any tremor that is recorded by any monitor around the world. Users are allowed to view the number and location of tremors on various different time scales – from daily, weekly, to monthly. Each dot on the map represents a location where tremors were detected. The size of the halo around it corresponds to the magnitude of the underlying earthquake – the bigger the halo, the more intense the quake. 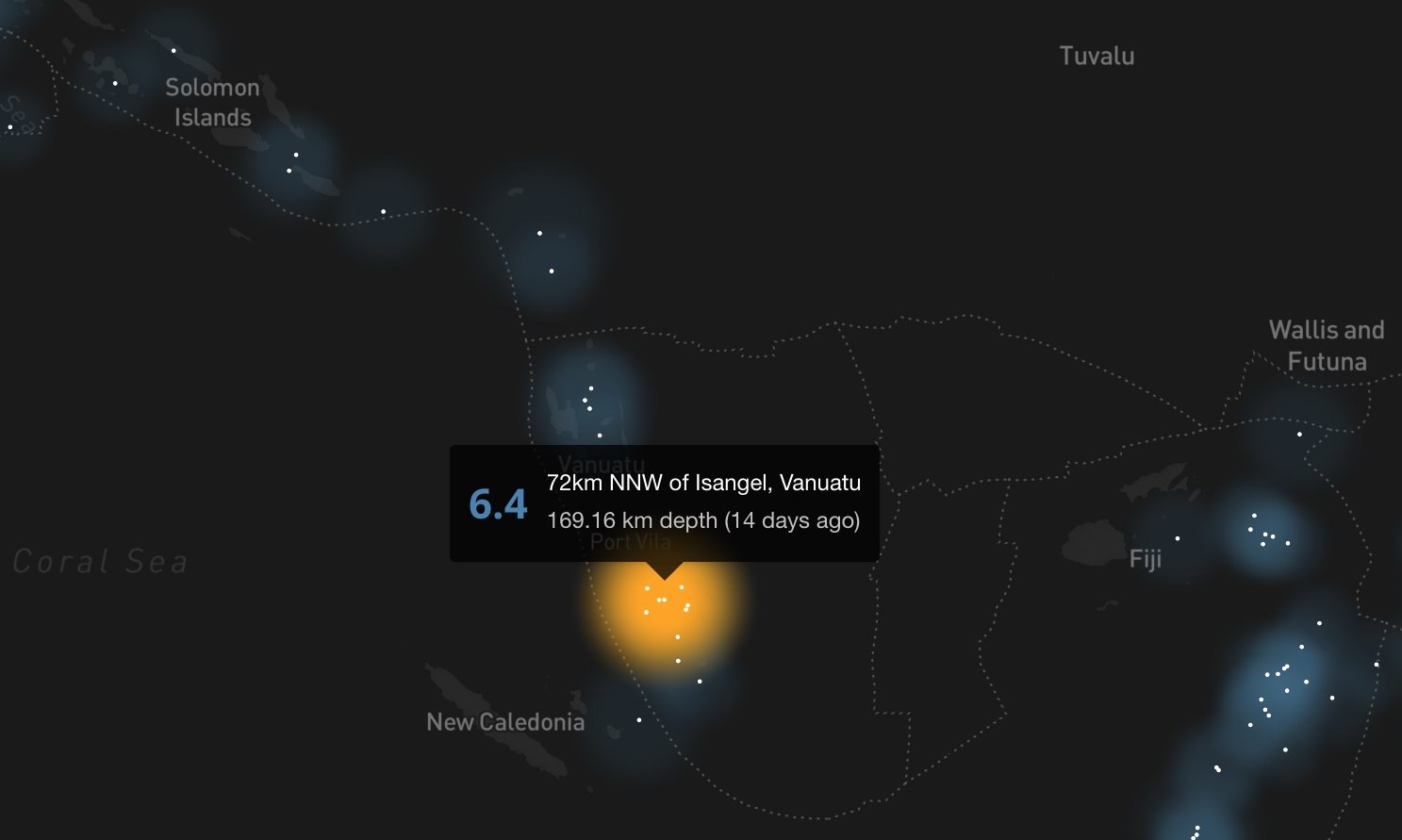 A panel on the left of the map lists the latest, strongest, and the most reported tremors for the selected time scale. In the past month, for example, the strongest earthquake was located northeast of Australia, close to the Republic of Vanuatu, with a magnitude of 6.4 on the Richter scale. On the other hand, the earthquake that was most strongly felt and therefore the most reported by people on the ground was a dense cluster of tremors around Ontario, California. This quake had a magnitude of 3.6 and was reported 1320 times. When you hover over any recorded tremor, the map shows the magnitude in blue and the attributes – including the magnitude on the Richter scale, relative location, depth of the tremor, and the recorded day.

The Richter magnitude scale, developed by Charles F. Richter in his 1935 paper, measures the strength of earthquakes. It is determined from the logarithm of the amplitude of waves recorded by seismographs. While an average of 500 tremors is recorded every day around the world, it is likely that the larger the tremor, the less frequently it will occur. One of the most well-known earthquakes – the 2011 Tohoku earthquake – was recorded at a magnitude of 9.1. The subsequent tsunami killed more than eighteen thousand people and triggered the meltdown at the Fukushima power plant in Japan which resulted in an estimated 220 billion dollars of damage. 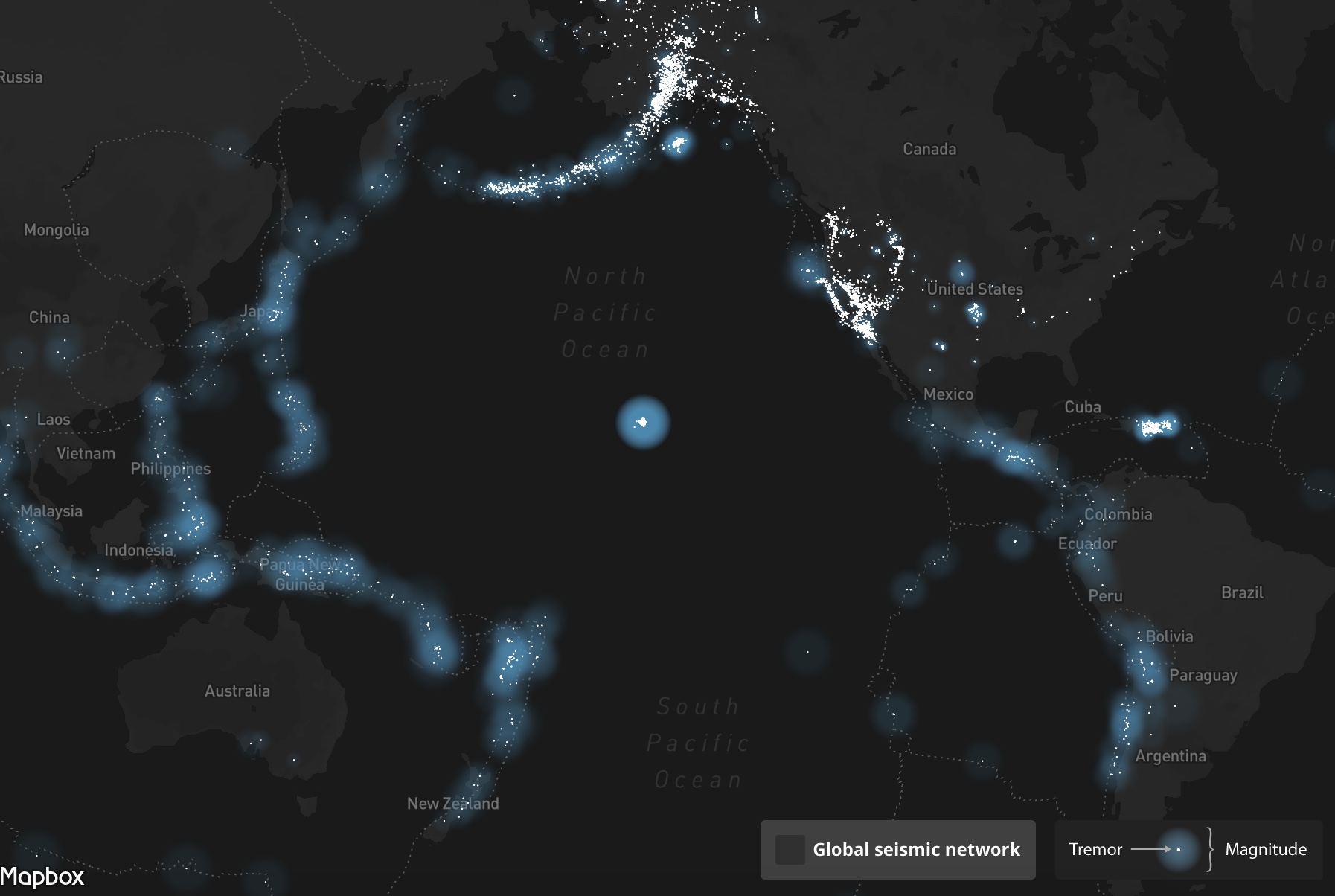 Although we don’t know when the next big earthquake will occur, we can be well-prepared beforehand. Applications such as “early earthquake warning system” and ShakeAlert provide residents with an earthquake warning a few seconds to around 30 seconds before the shaking begins- depending on the magnitude and the distance from the epicenter – so that they have time to react. The designer also provides the open source code for anyone to build their own earthquake tracker map, and to share it publicly. This map is a great representation of how today’s technology utilizes geography to assist scientific research and natural hazard relief.