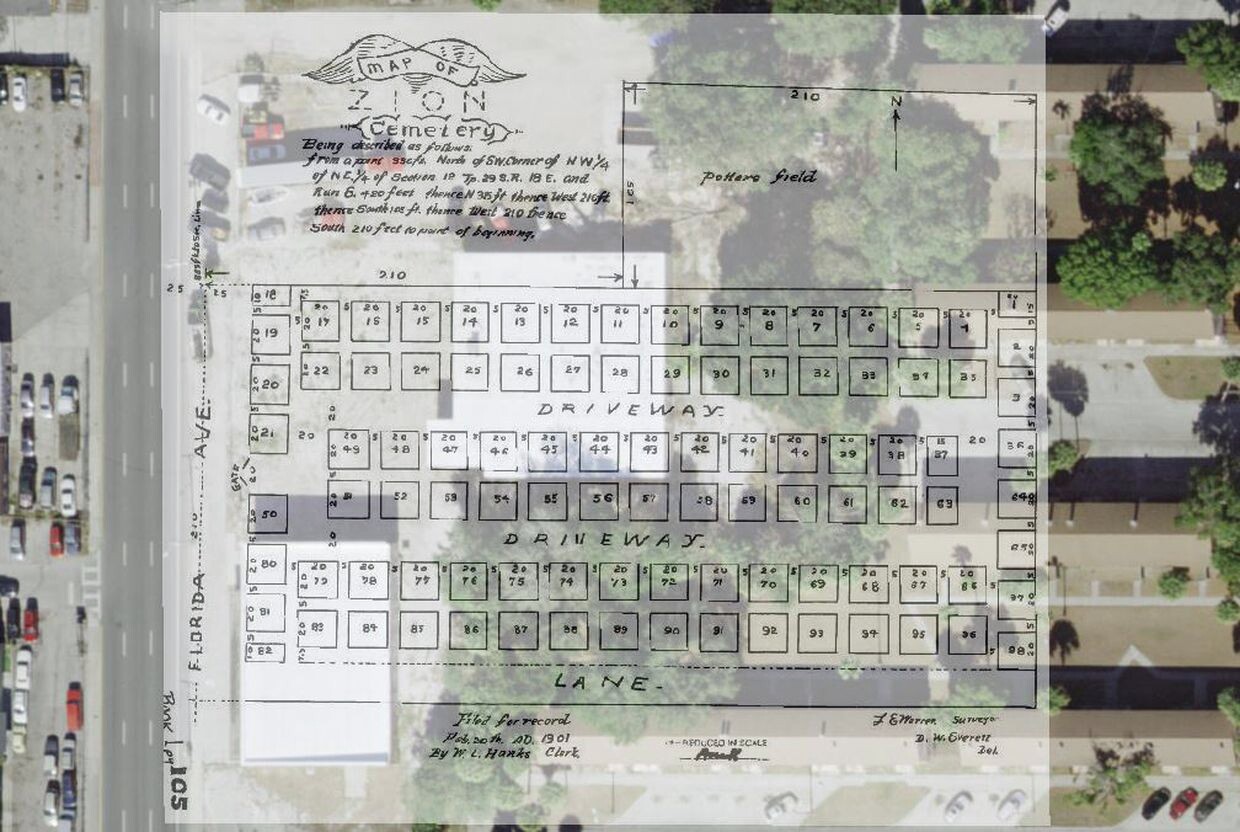 The original map of Zion Cemetery that was filed with the Hillsborough County Clerk on Feb. 20, 1901, shown in an overlay with the Robles Park Housing Complex before redevelopment. Image from Florida Public Archeology Network (FPAN).

Cemeteries and burial grounds hold a venerable position in human culture, providing a place for remembrance and contemplation, as well as communal gathering and celebration. They also serve as links to history, revealing movement and settlement patterns, demographics, conflict and for many, hold the only remaining records of past family members. However, for centuries, cemeteries and gravesites of African Americans have been subjected to abandonment or dismantling. Many of these sites, whether large properties or small plots, were lost as communities were segregated and pushed off land, and demolished in the process of municipal expansion, leaving descendants nowhere to honor their relatives or chronicle a collective past. Minimal written or governmental records exist of African American cemeteries, both during and after slavery. The intensification of climate change, more frequent natural disasters, and increased urban development have created a new urgency to locate and save these sites.

In recent years, geographers, archeologists, forest and parks service personnel, and local volunteers have used non-invasive radar technologies and mapping techniques to identify and validate potential burial sites across the country, particularly in the American South. 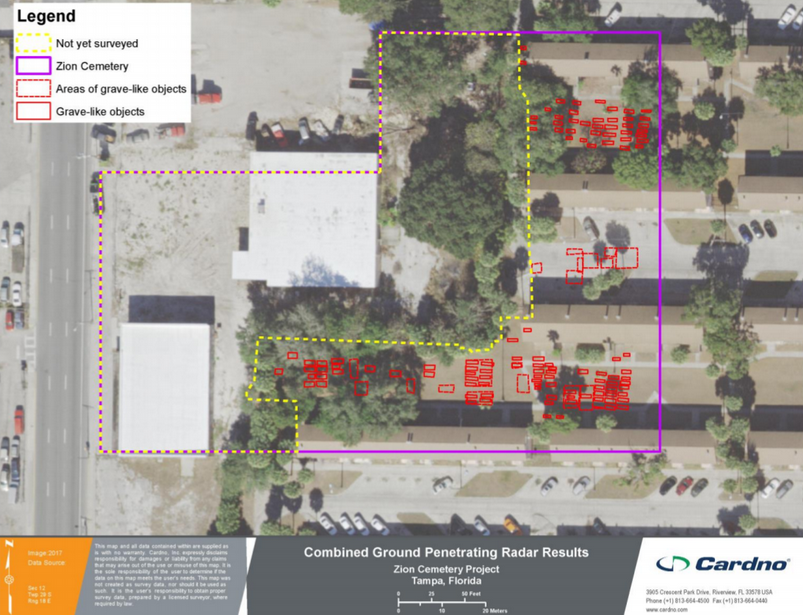 Aerial view of Robles Park Village and where an engineering and environmental services firm uncovered unmarked graves (in red).

In 2020, archeologists and volunteers from Florida Public Archeology Network (FPAN) used ground penetrating radar (GPR) to find gravesites on land once belonging to the Zion Cemetery at Robles Park Village, now a 2.5-acre housing complex in Tampa Bay. Believed to be Tampa’s first African American burial ground, Zion’s location under the Tampa Housing Authority community was re-discovered after local researcher Ray Reed examined century-old maps and death certificates, and a larger investigation was undertaken by Tampa Bay Times reporter Paul Guzzo. Originally established in 1901 in what was then the Black community of Robles Pond, Zion Cemetery was crowded out by white developers in the 1920s, the land sold off in pieces and eventually claimed through eminent domain by the Tampa Housing Authority in the early 1950st. Although remains had been found periodically over the ensuing decades, it was not until the Times investigative report and ensuing pressure on local lawmakers that a proper archeological excavation occurred. To date, over 300 caskets have been found and hundreds more are believed to remain at the site. Since these revelations, the complex has been under redevelopment and the cemetery designated for memorialization and continued archaeological study. 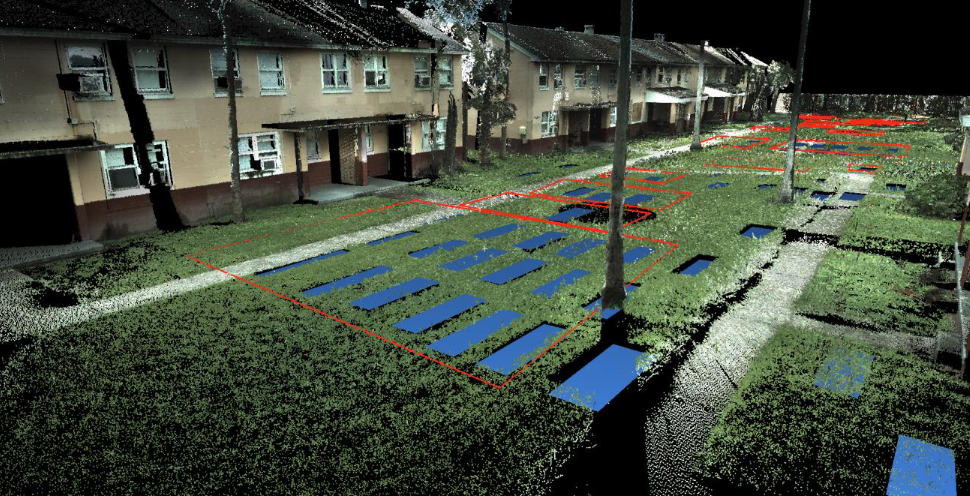 3D laser scan model of apartments in Robles Park Village with GPR anomalies in relation to the built environment.

Similar stories have since emerged in other Florida cities. Burial plots were found under a parking lot at the Tampa Bay Rays’ Tropicana Field in St. Petersburg, as well as across the bay in Clearwater, where hundreds more graves were found below an office building using radar detection. University of South Florida archeologists identified another 45 sites of unmarked graves throughout Hillsborough county in early 2022. Developers and local governments building and expanding in the post-WWII boom period claimed to have properly transported or preserved remains, but in many cases they did not. Recording the site locations of these cemeteries will protect them from future construction and site data will be on file digitally with counties, informing future buyers and project planning. 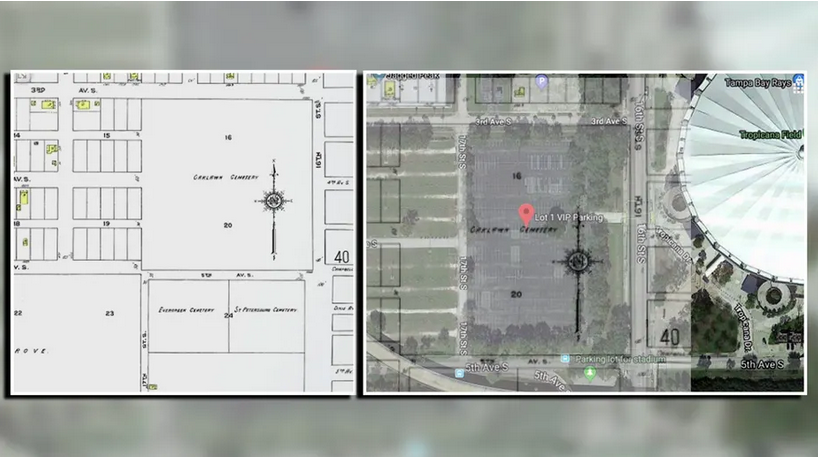 Maps showing the location of a possible cemetery under a parking lot at Tropicana Field.

Recent years have shown a growing movement to identify and protect African American cemeteries and historic sites in the United States. The Senate in 2020 approved the African American Burial Grounds Study Act, directing the National Park Service (NPS) to conduct studies in identifying, preserving, and recording unmarked, previously abandoned, underserved, or other burial grounds, with similar legislation enacted in Arkansas, Florida and Virginia, along with the District of Columbia between 2016-2021.

This momentum has helped spur successful cemetery mapping projects in other states as well. Researchers in geography, history, and GIS spatial analysis in Richmond, Virginia published a paper in the International Journal of Historical Archaeology detailing how they identified at least 8,000 potential unmarked or unrecognized gravesites in the East End cemetery using drones and GIS hydrology mapping software. Such methods search for areas of water pooling which can indicate a potential gravesite. A team from Western Carolina University is currently leading the first detailed surveys of African American cemeteries in the Great Smoky Mountains National Park using GPR and human remains detection (HRD) canines to locate sites and map the territory. 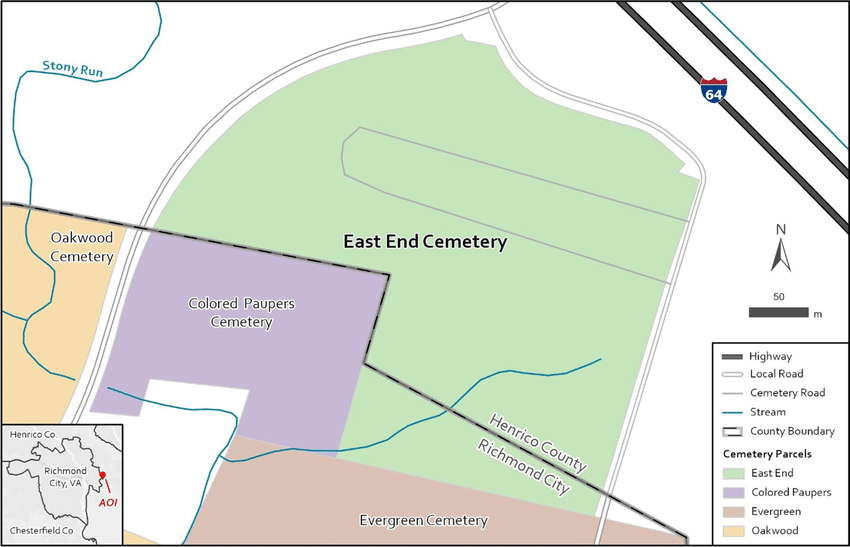 The East End Cemetery in RIchmond, VA was mapped by a team led by University of Richmond geographer Stephanie A. Spera and VCU History Professor Ryan K Smith.

Restoring the history of these sacred places is not only significant for regional or national history, but is also deeply personal for those descendants whose ancestors were buried, forgotten and nearly wiped from the records forever. February of 2022 saw the first funeral in over 100 years at the Zion Cemetery in Tampa. Jeraldine Williams gathered with family and community members to honor her great-great-grandmother, Anna Rebecca Wyche, a freed, formerly enslaved woman and businesswoman interred at Zion nearly a century before.

The Black Cemetery Network keeps an interactive archive of restored cemeteries and advances historical preservation work through research, advocacy, and collaboration. More on Tampa’s Zion Cemetery can be found in this ArcGIS Story Map by Melissa Porras from USF and in coverage from the Tampa Bay Times.

The interactive map archive at the Black Cemetery Network