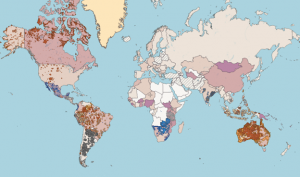 This week began with a holiday. Depending where you were, it goes by different names. The American majority still recognizes it as “Columbus Day” as it was named in 1972 (on the 300th anniversary of Christopher Columbus’s arrival in the Western Hemisphere). Made into a formal holiday by President FDR in 1937, as a “celebration of Italian-American heritage,” the nation has since re-evaluated what it means to celebrate a day in honor of a man whose “exploration” is directly correlated to the deaths of millions of Indigenous peoples.
Across the U.S. more and more cities, and even entire states, are undergoing a paradigm shift when it comes to the name of the holiday, but is that enough? In the words of Shannon Speed, citizen of the Chickasaw Nation and Director of the UCLA American Indian Studies Center, “Indigenous children are going to school and being forced to hear about and celebrate the person who set in motion the genocide of their people…That’s incredibly painful. It creates an ongoing harm.” To get to the root of the problem, we have to change how American history is approached in the classroom. More broadly, we must recognize the threat Indigenous tribes are still under, both in the United States and around the world. This week’s Map of the Week comes from Landmark, “the first online, interactive global platform to provide maps and other critical information on lands that are collectively held and used by Indigenous Peoples and local communities.”

Landmark is designed to equip Indigenous communities with the information necessary to defend their land rights, especially in areas of the world where Native populations are afforded very few legal protections. The Landmark map hosts eight different categories of data:
· Indigenous and Community Land Maps
· Percent of Country Held by Indigenous Peoples and Communities
· Indicators of the Legal Security of Indigenous Lands
· Indicators of the Legal Security of Community Lands
· Assets
· Pressures
· Land Cover & Change
· Basemaps 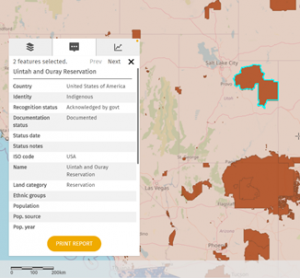 Each of these categories appear on the map as toggleable layers, intuitive for the user to manipulate. Each feature (Indigenous community) that appears on the map is armed with coordinating attribute data providing each feature’s country of origin, identity, recognition status, documentation states, and land category among other factors.
The Landmark map is an efficient tool that can be used to protect the world’s Indigenous populations. It is projects like this one and the United States Indigenous Sovereignty Network that are taking the time to prioritize these groups that have been too long overlooked.