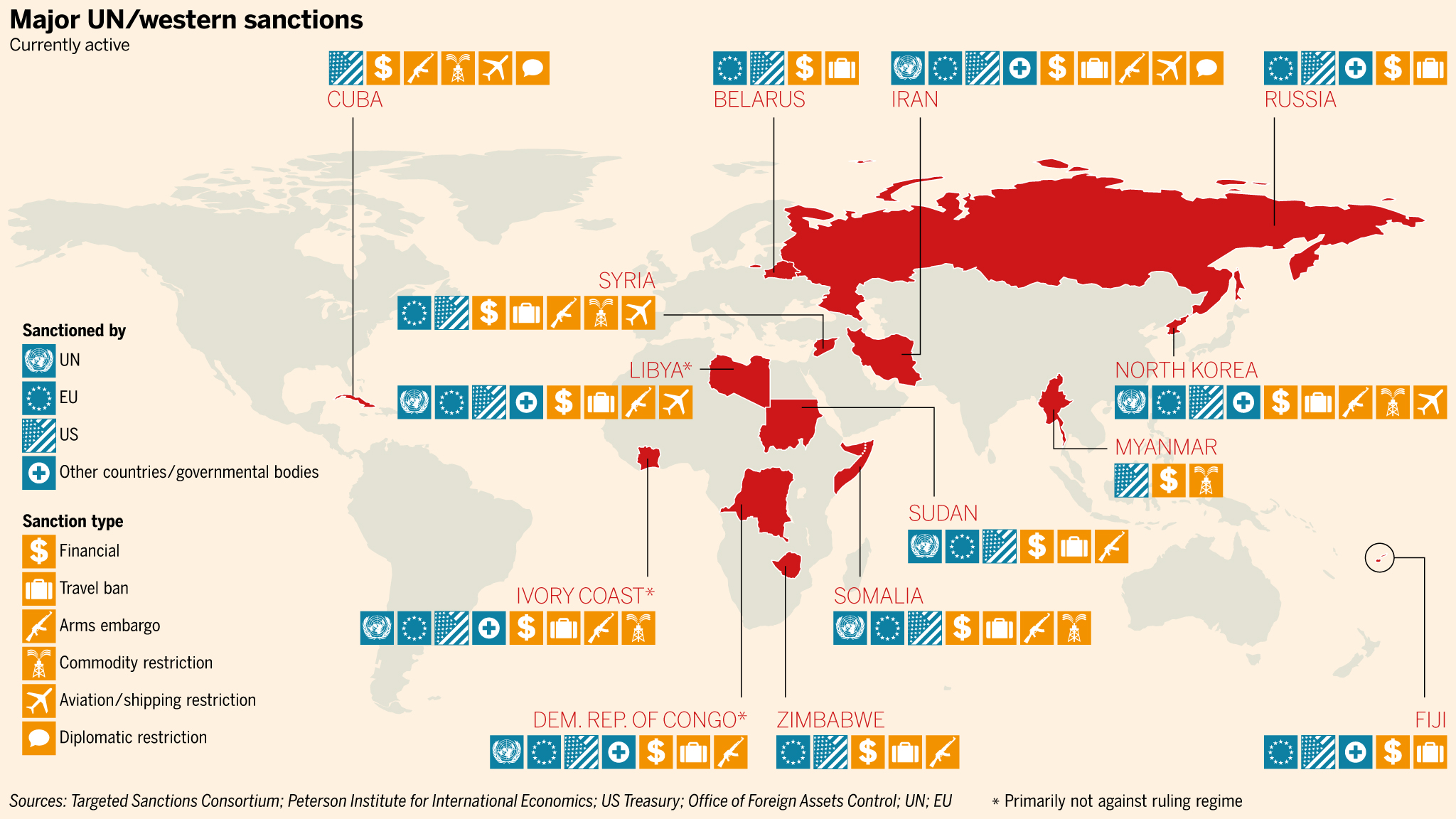 Throughout much of modern history, sanctions have been used to persuade, dissuade, and generally influence the behavior of governments for political ends, whether during the 1956 Suez Canal crisis, the 2014 Crimean Crisis, or through the ongoing economic sanctions on Iran. Sanctions represent the unilateral action taken by one or multiple countries against a state considered to be in violation of international law. Sanctions can include, but are certainly not limited to, the suppression of diplomatic recognition, the boycotting of cultural events, and sequestering the property of the citizens belonging to the sanctioned state.

This largely economic weapon is likely as old as trading itself. Some have traced its modern origins as a tool of blunt-force diplomacy to the ancient Greeks, when the city-state of Athens levied a trade embargo on the neighboring town of Megara, as far back as 432 B.C. In the past few decades, sanctions have been increasingly used in 21st century statecraft, with largely inconsistent results.

The map above depicts several types of sanctions: financial sanctions, travel bans, arms embargoes, commodity restrictions, aviation/shipping restrictions, and diplomatic restrictions. All such sanctions can be imposed by any country or governmental body, even the United Nations, and lie on a particular spectrum of intensity. Sanctions can be as intense as a diplomatic slap-on-the-wrist to more severe actions detrimental to a country’s socio-economic infrastructures.

Sometimes called “a war by other means,” sanctions have historically been used as a foreign policy tool and have been more or less unsuccessful in achieving its desired goals. The ineffectivity of sanctions is also coupled with the potentially devastating human costs it imposes on innocent people. Many, including United Nations’ human rights experts, have criticized the prospect of collective punishment in the process of economically sanctioning a country, calling it “illegal” under international law. The U.S.-imposed sanctions on Iran is one pertinent example of collective punishment infringing on their economic rights and right to health, as access to medicine is severely impacted by sanctions. On a number of occasions, United States officials have indicated that the collective punishment burdening ordinary Iranians is intentional, as part of a strategy to force Iranians to demand their government to change.

Another example would be Cuba, a country subjected to a six-decade long embargo imposed by the United States in a failed effort to topple the late Cuban revolutionary leader Fidel Castro and his communist government. However, such sanctions are imposed at the expense of the Cuban people accessing medicine and food imports, and more recently, coronavirus-related supplies. What the U.S. embargo has done is cost Cuba approximately $130 billion dollars in economic growth. These sanctions also raise questions about the arbitrary nature of the United States’ imposition of sanctions: why carry out sanctions against some countries accused of human rights abuses, such as Cuba and Iran, and not others, like Saudi Arabia?

Some types of sanctions, like the travel ban imposed by former President Donald Trump, have been met with public outcry and nationwide protests. A travel ban is a restriction of mobility that can be both universal or selective, based on geographic origin or jurisdiction, or based on health status. When the Trump administration banned foreign nationals from seven predominantly Muslim countries from coming to the United States, leaving many stranded at airports in jeapordy of being deported, those protesting the travel ban called it unconstitutional and anti-Muslim, violating the constitution’s basic guarantee of religious freedom.

Although there are certainly cases when sanctions have worked, famously in apartheid South Africa in the 1980s, a study by the Institute for International Economics found that in the years since 1970, unilateral sanctions by the U.S. had a 13% success rate in achieving foreign policy goals. The study also indicated that sanctions cost the U.S. up to $19 billion dollars a year in potential exports.

So why do countries still use economic sanctions, despite its relatively low success rate? Some argue sanctions give people the impression that their governments are “doing something.” Others argue that sanctions imposed by the West on vulnerable nations act as a tool of economic imperialism. Whatever the reason(s) may be, sanctions have a long and contentious history as a geopolitical tool, with far-reaching consequences that are far from black and white.

For more on the history of sanctions, check out this article in The Library of Economics and Liberty.