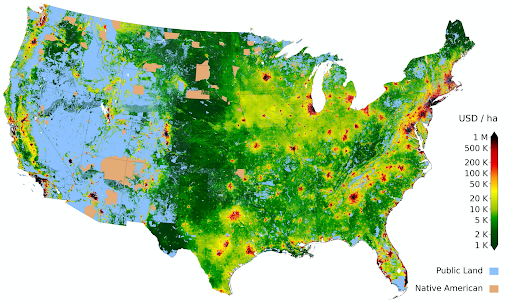 Today, private individuals and corporations own approximately 60% of land in the United States. In total, 77 million people own 1.3 billion acres of private land. Additionally, 63% of privately owned lands are farms and ranches, while 32% are forests.

In the 19th century, the United States Congress passed a number of laws encouraging the settlement of the Western U.S. through the dispossession of Indigenous lands. Through this dispossession, between 1781 and 2018,  about 1.29 billion acres of originally public territory was shifted out of national ownership. Around 816 million acres were transferred as private land, 328 million acres as land for states, and 143 million acres in Alaska for states and Native American selection.

The map above depicts public land, Native American land, and the value of private land in the contiguous United States.

The value of private property has increased in recent years, but significantly varies across the U.S. In the high plains area, where land is dry and requires irrigation for farming, the value of land decreases. The concentration of land with little profit value in eastern Kentucky and southwest Virginia is in line with the rates of severe poverty that can be found in Appalachia.

The use, control, and ownership of land has been a contested topic for years. Some argue the United States’ extreme disparities in wealth are tied to home ownership. Inequalities in U.S. health distribution are arguably approaching levels associated with the Great Depression in the early to mid 20th century — reflected in the increasing concentration of land ownership. Between 2008 and 2017 alone, the median land holdings of the top 100 U.S. landowners increased from 160,000 acres to 250,000, and the wealthiest one percent of households in the United States now own about 40 percent of the entire land value. Moreover, the top 10 percent alone own around 85 percent of land value in the United States.

This concentration of land is also a racialized one: the five top landowners, who are all white, own more acres of land than all Black Americans combined. Additionally, the original inhabitants of the United States own little, as Native reservations are deemed federal land and subject to federal policies, including natural resource extraction for profit. This increasing private land concentration by corporate and absentee owners has arguably aggravated economic inequalities and the destruction of the environment.

The 100 largest owners of private land in the U.S. have about 40 million acres of land amassed, making up 2% of the country’s landmass, up from 30 million acres only a decade ago.

The map below depicts the percentage of private lands in each U.S. state, the red states depicting those with the most private lands — the tiny speck of red on the East Coast is Rhode Island, which has the highest rates of privatized lands in the country. 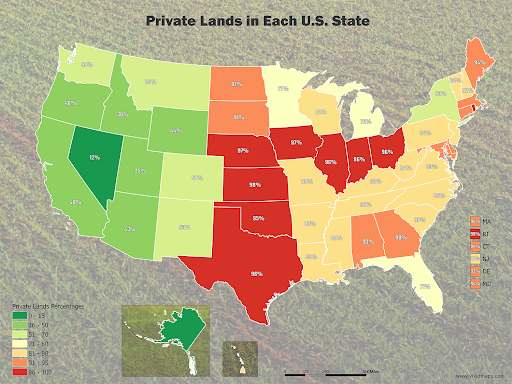 The Top 10 Landowners in the United States by Acres: