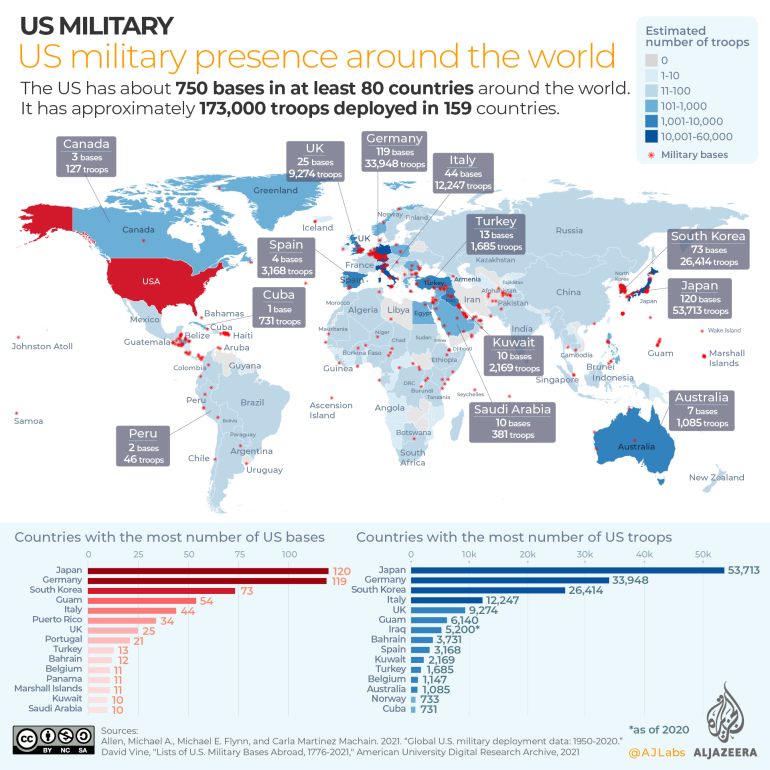 Most recently, on August 31, 2021, the last American military soldiers left Kabul, Afghanistan after a 20-year war — the longest in American history. At the peak of the United States’ historical overseas footprint (or bootprint), it had at least 100,000 troops and 10 military bases just between Bagram to Kandahar, Afghanistan.

The above map depicts the United States’ control of almost 800 military bases around the world, spattered across at least 80 countries. Japan has the highest number of American military bases in the world at 120, followed by Germany with 119, and then South Korea with 73. These bases fall under two broad categories: large bases (“bases”) and small bases (“lily pads”). Bases are military installations larger than 10 acres or worth at least $10 million dollars, often with more than 200 military personnel, and lily pads are less than 10 acres and with a value less than $10 million. Around 60 percent of all U.S. military bases are large bases.

These bases come in all sorts of shapes and sizes, from what David Vine calls calls “Little Americas,” which are the size of small cities that support independent schools, hospitals, power plants, and housing blocks, to tinier radar facilities. In comparison, Britain, France, and Russia have a roughly combined total of 30 foreign bases. According to Vine’s calculations, maintaining bases and troops around the world has an estimated annual cost of at least $156 billion dollars, prompting the question: Why does the United States need hundreds of military bases around the world? Do these bases make Americans safer?

The hundreds of U.S. military bases scattered across the earth have not received the mainstream media attention it most certainly warrants; additionally, this distinctly American phenomenon arguably does not occupy people’s minds as often as it should. Many have argued they are the foundation of any maintaining American empire. Beginning in World War II, the United States began a mission to acquire bases overseas, from remote islands to walled enclaves. The logic behind building this “empire of bases” as Chalmers Johnson so elegantly dubs, may in fact induce the opposite of security — as David Vine argues, these overseas bases could be making us less safe.

TIME suggested these bases are seen as a “symbol of [the United States’] status as the dominant world power,” even though they incur considerable costs and drawbacks. Many have argued these bases have a deterrence effect, but this so-called deterring effect is often exaggerated and as suggested above, may induce the opposite. For example, while some would argue U.S. military presence in Europe would deter Russian military aggression, others argue interventions in Georgia and Ukraine derive specifically from a post-Cold War U.S.-led military presence in the region.

Such bases can often encourage resentment in the locales in which they operate, such as the the Philippines in 1991 when their Senate “assailed [the U.S. military presence] as a vestige of colonialism and an affront to Philippine sovereignty,” or Japan in the summer of 2015 when at least 65,000 Okinawans protested against U.S. presence in Japan.

Some have called these military bases America’s “global imperialist footprint,” an unprecedented global presence to which the British, French and Spanish imperial empires of the past do not hold a candle. These military bases could hold the answer to understanding why the United States has been in a constant state of war or military incursion for almost every year of its existence. These military bases are arguably the “nuts and bolts” of the global war machine, providing the “logistical, supply, and combat support” making conflicts more likely to happen, leading to more wars, and more military bases, “in a vicious cycle of expansion and empire.”

To read more about the history of American overseas military bases as told by author David Vine in his book Base Nation: How U.S. Military Bases Abroad Harm America and the World, visit the History News Network.