Preventing the most extreme impacts of climate change necessitates a massive and unprecedented shift in energy production, moving away from fossil fuels and quickly scaling up effective alternatives, such as solar power. Solar radiation is available around the world and can be harnessed in a decentralized way. With advances in solar technology and renewable energy commitments from over 160 countries, more than 80% of new electricity capacity is now coming from renewables. The International Energy Agency (IEA) has projected that Photovoltaic (PV) energy generating capacity must increase nearly ten-fold by 2040 if climate targets are to be met and warming is to be kept below 2°C. This capacity has already increased 40% since 2009. Where to build the next generation of solar facilities, where this energy capacity is most needed, what the environmental impacts are, and what the most effective strategies for mitigating climate change are, are all intrinsically geographic questions. Mapping the exact locations of current and functioning solar plants is a critical step in addressing these challenges and moving the energy system towards renewables.

There remain multiple challenges in implementing solar power infrastructure at scale. The amount of sunshine received by the Earth’s surface varies greatly with weather and seasons, and is not available at night, so energy would need to be stored strategically for when the sun is unavailable. Additionally, peak radiation may not match peak electricity demand, or the areas most in need of energy may not be the nearest to high levels of emittance. The Southwest U.S. receives much more solar radiation than the Northeast, but populations are weighted in the opposite direction. Location is also of critical importance as large-scale solar installations must be balanced with agriculture, conservation and biodiversity, community and Indigenous land use, and transportation and residences. 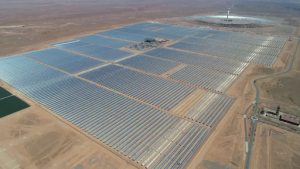 A solar thermal complex at Noor Ouarzazate in the Atlas mountains of Morocco capable of producing over 580 Megawatts of electricity.

Before recent advances in geospatial technology and the widespread availability of satellite imagery data, it was not possible to track where new solar plants and projects have been constructed on a global scale. Most current global inventories of solar power data provide overall generating capacity without specific locations of plants, and those that do have plant locations are self-reported and often incomplete. By utilizing satellite imagery and machine learning techniques, a team from Descartes Labs based in New Mexico published the first global inventory of large solar energy generating facilities in the journal Nature in October of 2021. Two different satellite data sources were used: Airbus SPOT and Sentinel 2 (S2). Airbus SPOT aided in identifying the actual patterns of solar panels on the ground because of its high spatial resolution 4-band imagery at 1.5m per pixel. Generating capacity is related to panel surface area, so mapping this footprint was important. The S2 satellite captures a new image of each point on the Earth about every 5 days, so this consistently updated information was used to track the most recently built plants and determine their age by looking through older sets of images. Using these two streams of satellite data, plants could be identified, scaled and then mapped as polygons. 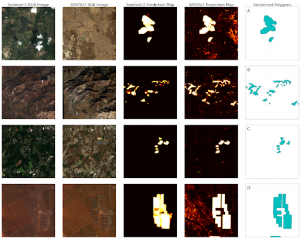 Analyzing this volume of data at a global scale required the development of machine learning models to be capable of creating accurate predictions about each pixel in a satellite image, so that the footprints were mapped, not only the locations. The models were trained using OpenStreetMaps (OSM) data from North America and Europe and hand-labeled data from Asia and other regions where OSM data was incomplete or unavailable. A multi-step analysis pipeline was deployed on the Descartes Labs geospatial platform which processed 550 TB of imagery and used 1 million CPU-hours and 20,000 GPU hours in a massive computational lift. 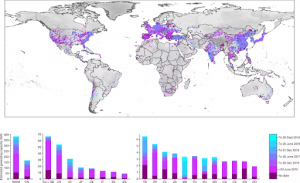 A map of all the large solar facilities detected up to 2018 (lighter colours = more recent) Kruitwagen et al, Nature

This new first-of-its-kind global dataset of solar facilities located 68,661 facilities – 432% more than previous datasets – accounting for 423 gigawatts (GW) of installed generating capacity at the end of 2018. Installation dates were added and land cover classes were identified and matched to existing asset-level databases. The results were in line with the International Renewable Energy Agency’s estimate of 420 GW for the years 2016-2018. Additionally, PV generating capacity increased around the world by 81% in the time period, with India, Turkey, China, and Japan building the most facilities and new generating capacity. The map located various types of facilities, from deserts in Chile, India and north-west China, to rooftops in Germany and California, to rural installations in North Carolina and England. 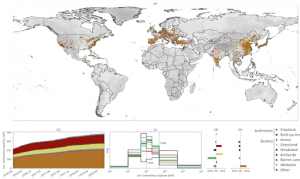 The authors compared the locations of the solar facilities to data on land use, to find out what was there before. Cropland (light brown) was easily the most common. Kruitwagen et al, Nature

In addition to filling in data gaps for developing countries and producing unbiased datasets outside of private companies and governments, this map and project is an invaluable tool in understanding the transformation of the energy sector to decarbonize the global economy. Knowing the locations and geographic contexts for solar facilities will help operators in both generating and delivering energy, and dealing with the inherent inconsistencies within solar. Increasing predictability in solar power generation will lead to more facilities becoming feasible and more able to adapt to climate change effects. This data can also help guide policy decisions and crafting more effective projects and subsidy interventions to drive solar growth. The impacts on land and environment can also be studied with this data by understanding the unintended consequences of these installations and can inform the future development of an increasingly renewable energy grid. Additionally, this project demonstrated that detailed mapping and monitoring infrastructure at a global scale is now possible and makes a significant contribution to our understanding of energy and the environment. There is vast potential in applying this kind of technology to addressing the global issues of climate change.

Access the original article in Nature and explore the dataset on ResourceWatch from WRI.