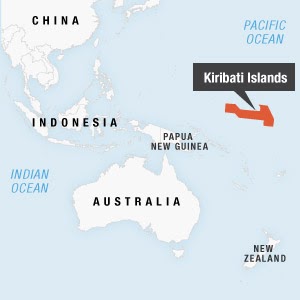 Located in the central Pacific Ocean, the Republic of Kiribati is a remote island nation comprising 33 islands. The islands are spread out along the equator covering a large portion of the Pacific, however if you were to add up the landmass of all the islands, they would only equate to about 810 square kilometers (~500 square miles).

One of Kiribati’s extremely remote islands, Caroline Island, was renamed “Millennium Island” because it was the first place in the world to ring in the new millennium on January 1, 2000. Just 24 square kilometers (~15 square miles) and 20 feet above sea level, this tiny island, along with the other islands within the Republic and throughout the Pacific, are enduring some of the worst effects of climate change and fear they may soon be wiped off the map completely. 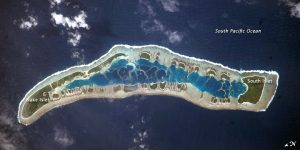 Twenty years have passed since we celebrated the new millennium, and it will be interesting to see what the next twenty years have in store for us. Small island nations like the Republic of Kiribati are being hit hard with climate change effects–specifically rising sea levels that are having devastating impacts on food security and economic prosperity–even though they contribute the least to greenhouse gas emissions and global warming. While many of us in the Global North fear the upcoming threats of climate change, many nations are already struggling to survive the impacts.

During Geography 2050, AGS had the pleasure of speaking with Kiribati’s former President and current Ambassador to the United Nations and the United States, Hon. Teburoro Tito, to discuss the impacts of climate change on his country and people, the surrounding ocean bounty, and how governments around the world could step up to ensure the vitality of island nations like Kiribati. 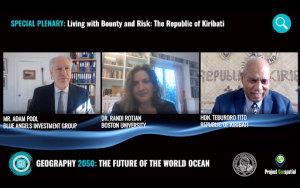