For this week’s “Map of the Week,” I will be focusing on two artists who use maps to redefine notions of space and place. While cartography has become a more popular medium thanks to digital mapping tools, these artists remind us of the origins of cartography as a fine art, and acknowledge the history of geographic fundamentals—from projections, to the way locations are depicted on the map. 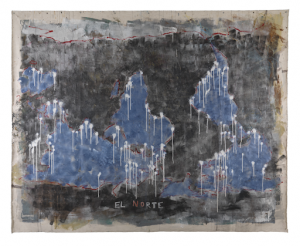 Artist Ana Vizcarra Rankin describes herself as an artist who “makes drawings, paintings and sculptures about travel and cartography.” One of her paintings on the subject was recently shown in a gallery at the Philadelphia Academy of Fine Arts (PAFA), and I had the pleasure of seeing it in person. Titled, “Global Optimization Diagram,” the painting is a commentary on traditional geographic projections. Exhibited as a part of the 2020 exhibition “Taking Space: Contemporary Women Artists And The Politics Of Scale,” the painting presented a global scale of place and space. The map is an approximation of a standard Mercator Projection, although it is quite literally flipped on its head, with the standards of orientation being reversed to put the South at the top. To further cement this, the artist wrote “El Norte,” Spanish for “the North,” at the bottom of the map. In my interpretation, the painting is a critique of optimization and development from the perspective of the Global South, which has a storied history of colonialism and more recently of neocolonialism under human development projects. The artist herself is Uruguayan American and by placing the South at the top of the map, she deconstructs the colonial origins of the Mercator projection, which was initially used and created for European navigators. Her art presents a new perspective of space, and as a part of the exhibition in PAFA, argues for a world where the Global South has a more commanding stature in the global scale. 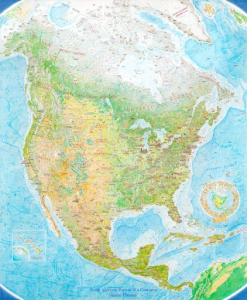 Artist Anton Thomas similarly challenges fundamental ideas within his cartographic work. With his completely hand drawn map of North America, he reminds the discipline of the beauty within cartography. Furthermore, he showcases the intricacies of each place on the map, something we lose through strict digital mapping. Born and raised in New Zealand, the artist’s studio is now based out of Melbourne, Australia. The story and vision of his North America map started in 2012 when he drafted up the map on his refrigerator door while he was living in Montreal. By 2019, he had finished the map, and in stunning detail, he captures the beauty of North America’s flora and fauna, the mythologies that make each place on the map unique, and the stunning skylines that define North American cities. My personal favorite is his attention to detail in the mountains that tower over my hometown in Colorado.  Artists and geographers more interested in his work should be sure to check out Thomas’ Instagram and Blog, where they can find close-ups of the intricate details of Thomas’ work.

Through the development of digital technologies, the discipline of cartography has ultimately evolved with it. While these advancements have meant wonders in fields such as disaster preparedness, epidemiology, and more, these artists remind us of the origins of mapmaking. Their works highlight the importance of maps as tools to present all aspects of a place. Most importantly, they prove that traditional cartography is far from a dying field, but rather, an art form in and of itself that deserves to be preserved and highlighted for its intrinsic beauty.