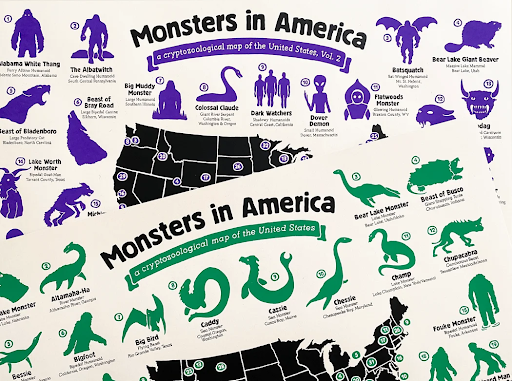 It’s late in the evening on a cold November night, two young couples decide to take a drive through the woods. As they drive, a dark figure appears to be following them, and gaining speed. The road is too narrow to allow another car to pass them, so the driver picks up speed. It is then that the occupants realize that there is no car behind them, but a large dark figure with glowing red eyes. Looking through the rear-view mirror, they see a monstrous sight, gliding through the night sky with a fifteen-foot wingspan. Slamming the gas pedal, the car reaches dangerously high speeds as it darts along the dark path, but with each passing moment, the creature keeps pace, flying closer and closer to the vehicle until easily reaching the back bumper. The creature gives chase for several miles, before vanishing into the night. 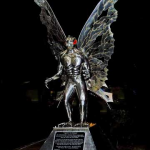 “Legend of the Mothman” as the story has come to be known, is a local legend of Point Pleasant, West Virginia. Like Salem, Massachusetts with the 1692-1693 Salem Witch Trials, the town has dedicated several stores and a statue to the mysterious creature. While a local myth, there are hundreds of other local legends around the globe of mysterious creatures being seen. These creatures are not animals in a zoological sense nor monstrous like those of myth, but rather a combination of the two, and this combination has created a new category: Cryptids.

The term cryptid was first used in publication in 1983 by self-proclaimed cryptozoologist J. E. Wall in the summer issue of the newsletter (Volume II, no. 2., page 10) of The International Society of Cryptozoology. The International Society of Cryptozoology (ISC) is a defunct organization (1982-1998), but their mission goals continue with the unaffiliated International Cryptozoology Society, founded in 2016. For those who do not believe in cryptids, cryptozoology is defined as a pseudoscience and subculture that studies and searches for evidence of unknown, legendary, or extinct animals whose existence is disputed or thought to be fictitious in nature.

Some popular cryptids of study are Bigfoot, the Loch Ness Monster, the Chupacabra, and the Jersey Devil. Several cryptids have even gone beyond the local legend scale, entering mainstream media and popular culture. Playstation’s Until Dawn featuring Wendigos, Poptropica’s Cryptids Island, and NHL team, the New Jersey Devils, bring these fantastical creatures to the mass populace. While some cryptids have found places in mass media, even more remain at their original regional scale.

Hog Island Press, a Philadelphia-based print shop founded in 2011, has taken these local tales and brought them to the world of cartography. Since 2015, the shop has produced two cryptids maps. Displaying the continental United States, the maps highlight the most popular cryptids in the country. Titled ‘Monsters in America: a cryptozoological map of the United States”, the two volumes feature a combined 66 unique cryptids. Listed alphabetically by cryptid name from left to right around the map, each cryptid is numbered and drawn with a short description of its geographic origin(s) accompanying the image. Whether a believer or a skeptic, these cryptids are right on theme for capturing the imagination during this spooky time of year. 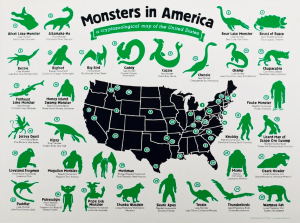 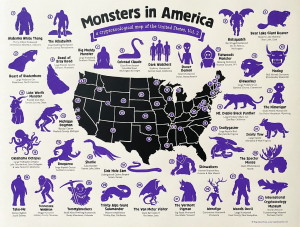