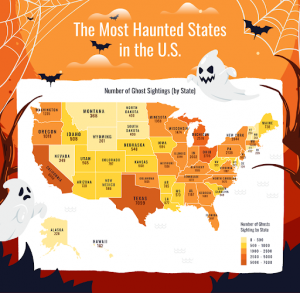 In honor of this spook-tastic month, we’re “creeping it real” and sharing the most haunted states in the U.S.! With the help of this new map , ‘The Most Haunted States in the U.S.,’ made by The Pioneer Woman, the number of ghost sightings recorded in each state have been revealed – giving those who love a good scare some potential new hot spots to visit, and scaredy cats a list of potentially frightening places to avoid. Their findings, which date back to 1972, show the number of recorded ghost sightings across the country, offering some insight into which states are considered the most haunted of all.

If you’re looking for a real fright, you should head over to Texas, which claims the title of the most haunted state of all with over 7,000 recorded sightings. With more ghost sightings over the past 50 years than any other state, you’re all but guaranteed to encounter the supernatural. Following closely behind Texas in the rankings for most ghost encounters are: (2) California, (3) Ohio, (4) Michigan, and (5) Illinois. On the other hand, if seeing a ghost sounds bone-chilling, don’t worry! You can hole up in the safety of Delaware, which has the lowest number of recorded ghost sightings since 1972. Other states that may offer more refuge and are almost entirely ghost-free include Hawaii, Wyoming, Vermont, and Alaska, which have had only a few hundred sightings each.

Do you think you’re brave enough to put these statistics to the test? Check out CardChat’s list of the Top 10 Spookiest Sites in the U.S. to see which haunted hotels, creepy tunnel systems, or eerie lighthouses will offer you the best scare. The American Geographical Society wishes everyone a happy Halloween and some good luck finding your next haunt!