Concerts have made a major return in 2022 as the COVID pandemic lessens its grip on the United States. People are eager to see their favorite artists on tour, and if a tour doesn’t come to a certain city or region, it is not uncommon for people to travel for hours to see live performances. This caused me to wonder: what areas of the country are best for live music?

This map from 2012 (and data from 2007) shows the distribution of musical acts per 10,000 people. While a bit outdated, the general trends can still speak to the popularity of musical acts in different areas. Los Angeles, Napa California, Las Vegas and Jersey City are at the top of the list. 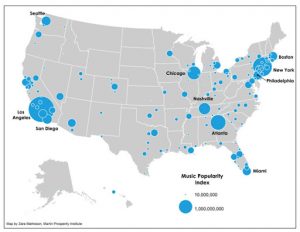 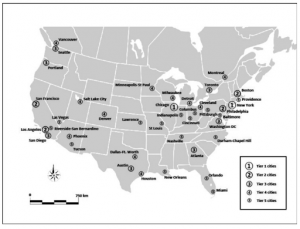 This map on the right from a 2014 study represents the hierarchy of metropolitan areas as represented by the number of performing rock artists. This type of measurement was preferable to the total number of concerts per metropolitan area due to the fact that some artists may play up to 10 times in one area, while others play only once in smaller areas. 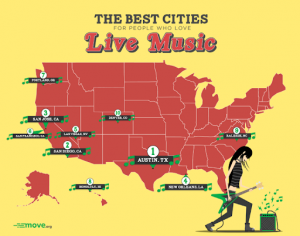 In 2019, Move.org ranked the top 10 cities for people who love live music by analyzing population data, the number of live music venues, and music venues per 100,000 people. On the map to the left, Austin, San Diego, San Jose, and New Orleans took the lead.

In 2015, VividSeats looked at factors such as median ticket price for all upcoming concerts in each city and overall number of concerts to find the most “music-friendly” cities in the U.S. and Canada. Philadelphia ranks highest, followed by Boston. 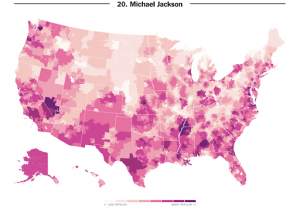 Finally, the New York Times created 50 Fan Maps about the popularity of famous artists in different regions in 2016 and 2017 with information from YouTube’s geocoded streaming data. Three of them are represented here. Depending on the genre, the distributions of listeners vary greatly.

There is a large array of sources that provide data on live concerts and music listening patterns in the United States. While the displayed information varies in methods and data changes from year to year, music connoisseurs can choose how to analyze music geographies by what is most important to them, such as price per ticket or frequency of concerts, to determine which cities best fulfill their music needs. It will be fascinating to observe how live music continues to evolve, especially in a post-COVID world.