Around the world, the rates of deaths and infections from HIV are on the decline, but many southeast African countries, such as Mozambique, Lesotho, and Botswana, remain at the epicenter of the epidemic. While researchers have long investigated the social and economic factors that make certain regions more vulnerable to infection, they are still figuring out ways to tackle the problem at a localized level. To that end, a team at the University of Washington-Seattle’s Institute for Health Metrics and Evaluation has developed a first-of-its-kind map that details the prevalence of HIV on the African continent: 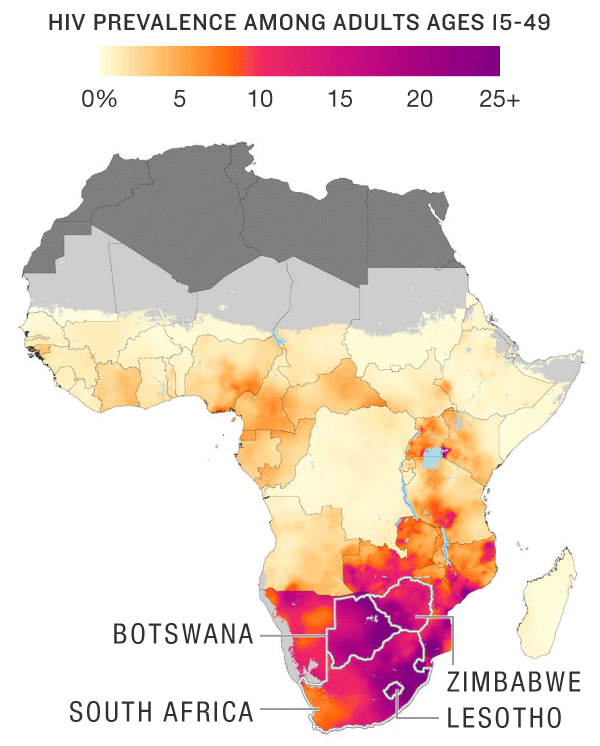 Unlike existing maps of HIV prevalence, this new map does not identify major hotspots of HIV infections and deaths by country or province. Instead, the researchers broke down the African continent into a grid composed of thousands of 9.6-square-mile squares. The data in each square was compiled through a statistical analysis of existing HIV data from 2000 to 2017, 134 public health surveys in 41 countries, and data from over 2,000 prenatal care clinics, which estimated the prevalence of HIV at each data point and matched it with GPS coordinates in order to create the map.

Regional variations in economic, cultural, and political conditions on the African continent have resulted in different levels of access and quality of medical care and the uneven distribution of the epidemic. As the map shows, the HIV epidemic is heavily concentrated within a very small percentage of these grid squares, but is almost nonexistent in the rest of the continent.

There are some limitations to this analysis. First, the study only considers persons between the ages of 15 to 49, which leaves out children and older populations. Second, the measurement of prevalence does not always indicate the rate at which the virus is or is not spreading. As the study notes, a higher prevalence of HIV in a certain area might actually mean that people are living longer after being infected, even though the virus was not fully eradicated.

Nevertheless, identifying the prevalence of HIV at such a precise, hyperlocal level has major implications for how to diagnose, treat, and prevent infections. Medical institutions, nonprofits and NGOS, and policymakers alike can use the map to know which locations need more treatment, and moreover, what kinds of treatments, how to distribute resources, and how they should allocate funding. This is especially useful in areas with limited public health resources. For example, a cost-prohibitive strategy such as providing access to every person in a certain community might be useful in high-concentration areas, which tend to be the source of infections. By considering the map’s data alongside local treatment and prevention programs, demographics, and the rate of new infections, researchers can target with precision the interventions they need to end the HIV/AIDS epidemic once and for all.