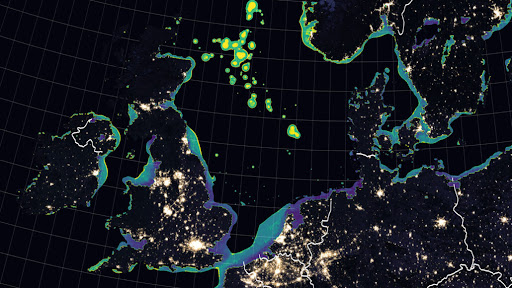 From raising blood sugar and heart rates in humans to inhibiting pollinators, the effects of artificial light at night (ALAN) on humans and terrestrial life has been subject to scientific investigation since the late 19th century. The planet is now illuminated to such an extent that more than one-third of the world can no longer see the Milky Way at night. While light from cities and ships has been shown to agitate many living species both in the water and on beaches, recent research has found that artificial night sky brightness can be harmful to deep sea marine life as well. A team of researchers has released the first global atlas of artificial light in the sea, the first comprehensive study of its kind to quantify anthropogenic light reaching the seabed.

Details of the map were published in Elementa: Science of the Anthropocene in December 2021. The study built on earlier research by Fabio Falchi, a physicist at the Light Pollution Science and Technology Institute in Italy, who published a global atlas of artificial night sky brightness in 2016. The new sea atlas was created with models using satellite datasets, including nocturnal light pollution and ocean color focused on the water’s optical attributes. Meshing this data together, the team was able to calculate how much light cast from above the surface can penetrate and how deeply it can be absorbed underwater. According to their findings, the light exposure is sufficient to affect biological processes among marine life.

The ‘artificial skyglow’ of ALAN disrupts natural light rhythms that many ocean species depend on to find food, regulate sleep, and reproduce. This is mainly caused by differences in artificial light from natural light – including duration, intensity and wavelengths. 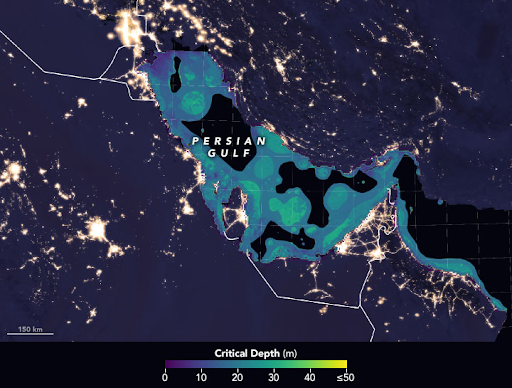 The Persian Gulf and the western coast of Saudi Arabia had some of the highest levels of light pollution due to dense shore development and heavily populated coastal cities. ALAN reaches up to 50m below the surface in some of these areas.

In 2020, a study by the same group of Plymouth researchers looked specifically at small crustaceans called copepods that move vertically up and down in response to stars and moonlight the water column to feed or evade predators. Copepods have evolved a powerful sensitivity to light and can sense changes below the surface at more than 260 feet (80 m), a depth far beyond human eyesight. Investigating the Plymouth Sound and Tamar Estuary, the Plymouth team found that although there was minimal impact from red wavelengths, three-quarters of green and blue wavelengths reached the seafloor, which are the primary colors emitted in energy-efficient LEDs. These types of lights are increasingly used to illuminate coastal streets and buildings overnight, switching on abruptly at sunset and staying lit year-round, rather than waxing and waning like the moon in daily, monthly, and seasonal patterns.

Lead author and oceanographer Tim Smyth explains how using these atlas models to map light distribution and intensities can indicate areas where ALAN is particularly stressing ecosystems with potentially significant consequences for evolutionary changes and adaptation. Foundation species are some of the most affected by anthropogenic light, such as those in estuaries near the coast or coral reef regions, where clearer waters can leave 100% of the seafloor exposed to light. Artificial light in these regions not only comes from island development and offshore installations, but also from the 50,000 merchant ships sailing around the world at any given time. 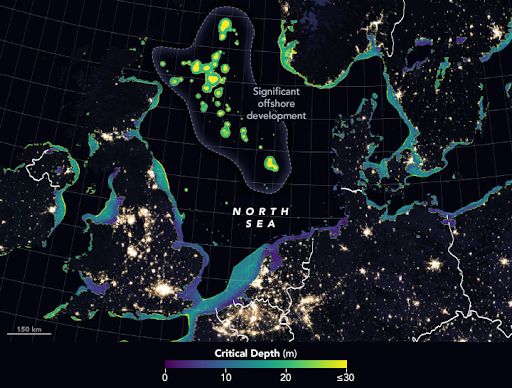 Offshore oil and gas platforms, wind farms, and island development account for extensive marine light pollution, as seen here in the North Sea between the U.K. and Norway.

With one billion people predicted to live in coastal areas by 2060, light pollution is projected to increase significantly in coming decades. Future planning and development should consider the impacts of ALAN on the ocean and its inhabitants. While the global atlas of artificial light in the sea is an important step, the subject remains understudied. Those who are interested can follow the emerging research through the Global artificial Light Ocean netWork (GLOW), a group of scientists studying ALAN effects on ocean life and the ongoing Artificial Light in Coastal Ecosystems (ALICE) led by Plymouth Marine Laboratory.