New York City Mayor Bill de Blasio has come up with a blueprint to enforce new citywide regulations that would help in the fight against dangerous, and costly flooding on Manhattan’s Southern tip. Part of his “OneNYC” initiative, the plan intends to build out the Financial District’s waterfront up to 500 feet into the East River in order to protect against coastal flooding.

“We’re going to build it, because we have no choice.” said Bill de Blasio in a statement detailing the plans: 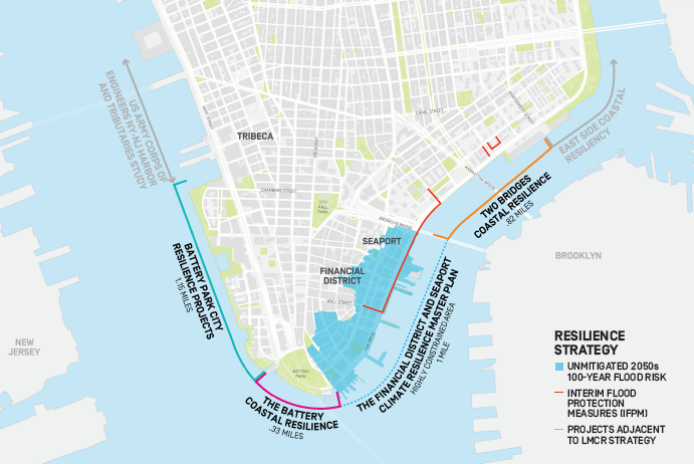 The $10 billion dollar plan will fill the gaps in New York City’s coastal defenses and thus effectively protects  Lower Manhattan from the devastating economic and physical effects of flooding. The southern point of New York is home to a variety of venues, including the Financial District which is home to half a million jobs and over ninety thousand residents. Flooding in this area has proven to be devastating: Hurricane Sandy caused $19 billion in damages to NYC and shutdown the subway system for over a week.  Some parts affected by Sandy are still undergoing recovery, and will continue to do so. Moreover, the rate of development along New York City’s coast is only increasing. “New York now has more residents living in high-risk flood zones than any other city in the nation.” (Business Insider) A rethinking of New York City’s coastal protection system is essential if it plans to survive another natural disaster.

Already, a new $615 million sea wall that will protect the eastern shore of Staten Island is underway.  Bill de Blasio’s plan will invest an additional “half-billion dollars to fortify most of Lower Manhattan with grassy berms in parks and removable barriers that can be anchored in place as storms approach.” (Intelligencer) The plans to secure New York City’s coastal areas against flooding goes even further. In a statement from de Blasio, he outlines more provisions that will take place in his vision:

“Over the coming years, we will push out the Lower Manhattan coastline as much as 500 feet, or up to two city blocks, into the East River, from the Brooklyn Bridge to Battery. The new land will be higher than the current coast, protecting the neighborhoods from future storms and the higher tides that will threaten its survival in the decades to come.” (Intelligencer)

If everything goes according to plan, the project will secure Lower Manhattan against rising sea level until 2100.