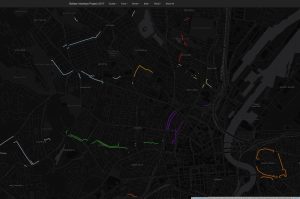 This map, from the Peacewall Archive, shows where peace walls in Belfast are still up in 2017.

The Troubles was a period of violent conflict from 1969-1998 in Belfast between paramilitary groups and the British military over ethno-religious identities. Peace walls were boundaries that were constructed throughout the period to separate Protestant and Catholic neighbourhoods to prevent violence. When the Troubles ended with the Good Friday Agreement in 1998, the conflict came to a formal end and the city started rebuilding and repairing relations between the two communities. The map above shows that perhaps Belfast has a long way to go, as almost two decades after the conflict peace walls are still up in various parts of the city, keeping these neighbourhoods separate. 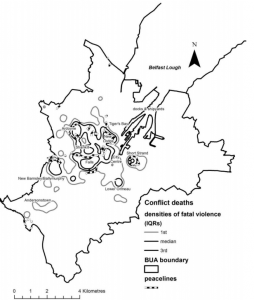 Furthermore, the map above, by Cunningham and Gregory (2014), shows that many deaths that occurred during the troubles were near peace walls, showing that creating physical barriers in a city to separate populations may do more harm than good. The fact that these walls still are around may be an indication of a lasting divide.