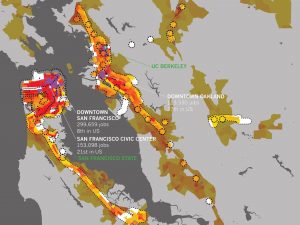 This week’s Map of the Week is looking at the best and worst public transit maps in the United States. Based on Christof Spieler’s atlas, Trains, Buses, People: An Opinionated Atlas of U.S. Transit, he shows how transit systems can be improved by catering to the service of the system and not the most popular mode of travel. Local transit systems need a large spatial landscape to overcome geographical barriers and connect dense neighborhoods with employment and education opportunities in downtown areas. In his atlas, Spieler provides several maps of downtown areas, including San Francisco, L.A., and Dallas, that shows how public transit will be successful if its placement and quality of service are factored into its development. 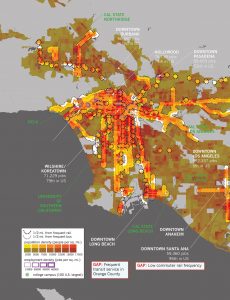 The San Francisco map pictured above Los Angeles’ map to the right show some of California’s urban transit systems. The layered attributes include the distribution of California’s largest colleges, like UC Berkeley in San Francisco, and University of Southern California in Los Angeles; employment density; population density, and frequency of rail and bus stops. Highly populated areas of San Francisco, Oakland, Hollywood, and L.A. do have accessible transit options within city limits. While the bus and rail routes are extensive for these dense areas, there are significant gaps. The gaps between transit lines seclude residential from downtown areas, where opportunities for employment and education are. Neighborhoods with lower to medium population densities per square mile have limited access to major cities because of gaps in transit stops. While Los Angeles remains a more transit-friendly city than San Francisco, there is still low commuter frequency on the rail lines. Now a car-oriented city, maybe one could review the possibility of increasing ridership for rail systems, reducing the dreadful vehicle traffic on the roads. Overall, the disconnectivity between stops is less because of the mode of rail lines, but rather due to the bad service of areas that are in most need of more transit options. 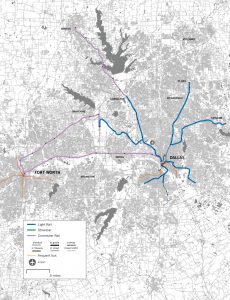 Similarly, the map of the Dallas Light Rail System (DART), which connects the downtowns of Fort Worth and Dallas, Texas does not properly function for the metropolitan area. As the longest light-rail network in the nation, the hub and spoke transit network ignores connectivity from intermediary locations to the central hub of Dallas. Skipping connections to Dallas Love Field Airport, the medical district, and Uptown Dallas where there is a high concentration of jobs, the transit had many missed geographical opportunities. This is why it has low ridership, and DFW remains a commuter city via roads, rather than rail transit.

The success of transit is in connecting key, economic locations in densely populated areas to residential neighborhoods outside city limits. When transit-friendly areas like New York City, Seattle, and Houston are reviewed, Spieler explores that the transit modes are not universal. Whether by bus, rail, or metro, the type of transportation mode is irrelevant. Rather, the success is based on “the density and walkability of an area, and the connectivity, frequency, and reliability of the service.” With a better geographical layout, more access points, and frequent stops, transit options in any city can meet the needs of the riders and be successful.