Besides being informational, maps can have strong social power. Maps are a mode of representation, meaning that they often do not depict the entire scope of an issue, and can contain bias. Maps are more commonly being acknowledged as, “performative, participatory, and political,” produced by people within specific contexts who have differing backgrounds and agendas. From early on, maps have played a role in colonization and are created by those who have the most power. Counter-mapping and critical cartography are ways of correcting or denouncing injustices, geographical misrepresentations, or a lack of representation.

Historically, queer communities and experiences have been misrepresented and underrepresented, especially when it comes to data that can be mapped. Even in the early 2000s, GIScience had overwhelmingly neglected queer topics. More recently however, people have begun to take this underrepresentation into their own hands and create cartographic resources that share stories of queerness.

Founded in 2017, Queering the Map is a, “community generated counter-mapping platform for digitally archiving LGBTQ2IA+ experiences in relation to physical space.” It allows for people to share their stories regarding queerness and place them on a map, providing a consolidated space for queer people to preserve and share memories. Founder Lucas LaRochelle explains how Queering the Map is  “a platform for orienting oneself, to see the world from another person within our community, and its multiple glorious intersections across race, international, ability, and citizenship.” The types of memories included on this map provide queer travelers with the reassurance that they are not alone in their experiences in all types of places around the globe. 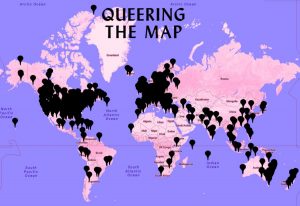 An artificial intelligence called QT.bot is trained on the textual and visual data from Queering the Map. The outputs it creates show the story that was written, as well as an image from the coordinates where the story was placed on the map. 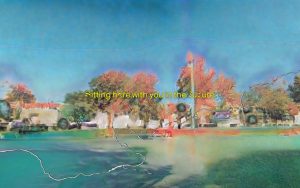 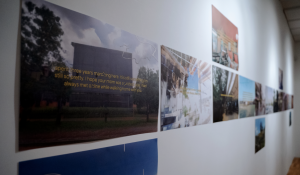 As part of the LGBTQ America project, stemming from the National Park Service in an effort to tell a more whole history of America, people can add pins to a Historypin map. This resource allows people to learn more about cultural resources and historic places that have played an important role to the LGBTQ community in the United States.

Mapping the Gay Guides is a resource that maps a historic guidebook for queer men created by Bob Damon in the 1960s. These guidebooks became survival guides for gay and queer travelers in the United States. Mapping these guidebooks creates a display of distribution and shows the growth and evolution of queer communities. 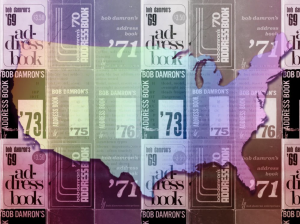 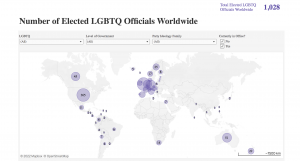 Queer maps do not always have to be strictly informational; they can have an artistic spin as well. A previous Map of the Week discusses Monarchs and Queens by Mona Caron and Ben Pease, that juxtapose butterfly habitats and queer hangout spaces. A book titled Queer Spaces: An Atlas of LGBTQIA+ Places and Stories contains stories and images of queer spaces that mean something to different filmmakers, artists, planners, activists, urban geographers, and writers. 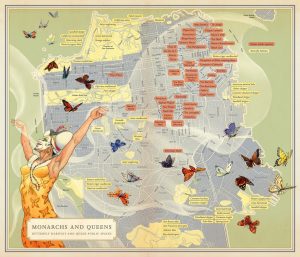 Queer geographies are all around us. Next time you are on a walk or looking at a map, consider the types of stories, told and untold, that have taken place all around you.