23andMe is a popular genetic testing website where users can send in some of their saliva and receive a full report of their genetic makeup, including ancestry. The data received ranges in intensity, from “I carry this super-rare-genetic-disease-gene that I can pass on” to “I have green eyes because of my great grandfather.” One gene that always has people talking is the presence or absence of the variants that reveal themselves as red hair.

Hair color comes from melanin, which is the pigment in your skin, hair, and eyes. If you produce a lot of the melanin-type eumelanin, you are likely to have darker hair. Blondes do not produce much eumelanin. Redheads have low levels of eumelanin as well as high levels of a red pigment called pheomelanin.

The gene that determines whether or not you have red hair is called MC1R, and it is found on Chromosome 16. MC1R tells the body what kind and how much melanin to produce. Different variants on the gene determine how the trait gets expressed. Some of the first known sequences of this gene can be traced back to Neanderthals in Spain and Italy! 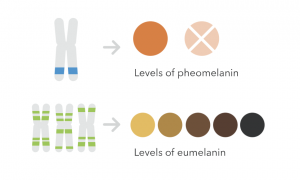 23andMe was able to map where red hair variants are most likely to occur. These maps can be used to explain ancestry for people who do not currently live in Europe or haven’t had family living in Europe for generations.

First, they found that the frequency of red hair variants correlates directly with distance from the Equator. In Europeans, as you move farther from the Equator, the more redheads you are likely to see. There are many theories to explain this, but the currently accepted theory is that in the north there is less selective pressure to have dark hair. Darker hair protects cells from ultraviolet radiation, and in turn, decreases the risk of skin cancer, so when you live in an area that doesn’t have as much sun, that variant is better able to survive.

Second, they found that there are three main variants, and each is more popular in different regions of Europe. The most common variant is R151C. In the first map above, this variant is most common in the British Isles and Norway. “Over 50% of 23andMe redheads carry at least one copy of this variant.”

The second map shows the D294H variant. This variant is overall the least common but is the most common in Ireland.

The third variant, R160W is shown on the third map. This variant is most common in Scandinavia, Lithuania, and even parts of Germany. The discovery of this variant proved that although it is stereotypical that redheads are from Ireland/Scotland, that is not always genetically true.

A showing-redhead could have any combination of these three, along with other variants that are still being studied. On the other hand, someone could have multiple variants and still not show red hair.

No matter where their hair comes from, all redheads are beautiful, and just a little bit rarer than everyone else.