As of 2022, 100 million people have been forcibly displaced worldwide as a result of ongoing conflicts, violence or human rights violations. 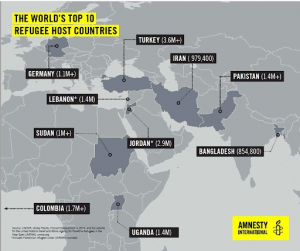 Refugees are people who have had to flee their homes and take shelter in another country for safety. Often they must leave behind everything – their homes, possessions, jobs and loved ones. According to the United Nations High Commissioner for Refugees (UNHCR), by the end of 2021, about 89.3 million people were forced to migrate, among which 27.4 million men, women and children were registered as refugees across the world. Furthermore, the ongoing conflicts and crises in Afghanistan, Palestine, Syria, South Sudan, Burkina Faso, Myanmar, Yemen, Venezuela, Ethiopia, and Democratic Republic of Congo have led to the displacement of thousands of people from their homes every single day.

At present, there are around 26 million refugees around the world, half of which are children. Moreover, 1.4 million refugees are in dire need of resettlement, with more than 85 percent being sheltered by lower and middle-income countries. So far, Turkey, Jordan, Sudan, Colombia, Uganda, Bangladesh, Pakistan, Lebanon, and Iran have hosted the majority of global refugees. However, many countries have restrictive policies towards neighboring refugees that discourage people to seek asylum or force shelter seekers to take dangerous land and sea journeys, which has already cost thousands of lives. The resettlement process is also very slow; over the past decade, only 1 million refugees were resettled, while 3.9 million refugees returned to their country amid crisis.

UNHCR, in collaboration with resettlement countries and civil-society partners, seeks to introduce a resettlement plan to shelter more asylum seekers. However, UNHCR should encourage refugee participation in resettlement plans formulation, so that they can provide valuable insight on opportunities and threats associated with local initiatives. To conclude, more countries should open the door for refugees and contribute to their education, health, and above all, the resources necessary to secure a quality life.