As New Orleans prepares to remember Hurricane Katrina on the 15 year anniversary this Saturday August 29th, and coastal cities in Louisiana and Texas assess the damage of Hurricane Laura, it’s important to understand the lasting effects of Katrina today, and how those will impact responses to Hurricane Laura and future storms to come.

Hurricane Katrina officially hit Louisiana on Monday August 29, 2005 at 6:10am. To fully understand the storm and the damage it caused, it is crucial to look at this disaster not only through a scientific and geographic lens, but a cultural and political one as well. The disaster that ravaged the city of New Orleans may not have been as natural and unavoidable as presumed.

Louisiana sits on the southern coast of the U.S., bordering the Gulf of Mexico. The city of New Orleans is unique in that much of the land is below sea level. The region’s low-lying topography made it susceptible to extreme flooding from Hurricane Katrina. New Orleans is no stranger to floods; bordered by Mississippi River, Lake Pontchartrain, and coastal wetlands, the city is surrounded by water. 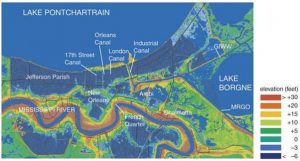 Topographic map of New Orleans and surrounding bodies of water

Centuries of draining surrounding wetlands to promote suburbanization unintentionally aided in the depression of the lowlands (as water drains from the soil, it begins to compress or subside). Levees have been built all along the lower end of the Mississippi River and in New Orleans to prevent river flooding. With miles of man-made levees restricting the river’s access to the floodplains (a natural storage of water that acts to lessen the severity of floods), the river can no longer transport sediment—restricting deposition to the channel and increasing aggradation ultimately fostered greater wetland depletion. The destruction of wetlands meant fewer natural levees, decreased storage capacity, and limited storm protection.

In 1956, the construction of the Mississippi River-Gulf Outlet (MRGO) was authorized. The 75-mile-long canal would promote economic development by providing a more efficient shipping route. Local residents were vocal about their concerns on the construction of MRGO, arguing that it could potentially act as an inlet for seawater. Not only did the canal require the removal of 16,000 acres of marshland, but it also provided saltwater access into the wetland regions. The material dug out for the canal was dumped into nearby wetland areas, disrupting ecosystems and killing much of the wildlife inhabited there. In Prioritizing Health: A Human Rights Analysis of Disaster, Vulnerability, and Urbanization in New Orleans and Port-au-Prince, Dr. Jean Carmalt notes, “Wetlands began to disappear at an alarming rate—approximately one American football field every 38 minutes (about 6500 yards squared or 5350m squared)—as saltwater killed the fragile plants that held wetlands in place.”

(The map to left depicts wetland depletion over the years.)

Up until 2005, MRGO was frequently dredged in order to maintain the necessary depth as wetlands kept falling into the canal. Wetland loss made New Orleans much more vulnerable to hurricanes. Hurricane Katrina’s trajectory was accurately predicted three days prior to hitting the coast. The hurricane reached a Category 5 before making landfall at a Category 3. MRGO essentially created an open pathway for the storm surge to enter into the city. Dr. Carmalt explains, “The model showed that the storm surge was increased by 300% by the existence of the canal, and that without the MRGO, the flooding would have been lessened by 80%.” 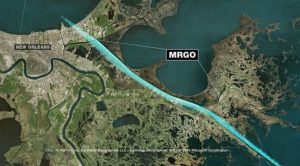 When Katrina hit, the Hurricane Protection System was breached in 50 different places; water overflow eroded the clay floodwalls—something both anticipated and preventable. The storm surge peaked at almost 30 feet high; 80 percent of New Orleans was flooded, in some places up to 20 feet deep, and waters did not recede for several weeks. Katrina destroyed 300,000 homes and left behind 118 million cubic yards of debris, devastating about 90,000 square miles. The storm cost about $90 billion in property damages, with an economic impact totaling over $150 billion in Louisiana and Mississippi, making it the most costly natural disaster in U.S. history. Of most importance, over 1 million people were displaced and about 1,800 people died—mostly by drowning. The devastation suffered by New Orleans and its people from Hurricane Katrina was a direct result of negligence on multiple accounts. Lacking risk prevention coupled with the inadequate relief efforts magnified the costliness of this disaster. 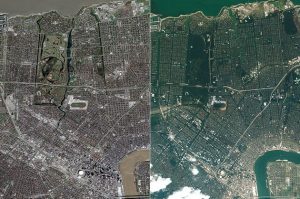 Satellite images of New Orleans before and after Hurricane Katrina

The risks posed by the construction of the MRGO were disproportionately borne by the city’s African American population. African Americans living in New Orleans were considerably more prone to living in neighborhoods that encountered flooding, making them even more vulnerable during such events as Hurricane Katrina. Possibly the most explicit illustration of such disparities was the extreme flooding of the Lower Ninth Ward, a neighborhood comprised of 96 percent African Americans. The levees that broke on the 17th Street and London canal before being completely filled with water exemplified the deficiencies and poor management of the infrastructures. The breaches caused by erosion were not only fundamental in paving the way for some of New Orleans’ most detrimental floods—including the Lower Ninth Ward—but were also entirely expected, telling of the negligence of the levees’ upkeep and abandonment of the peoples’ security. 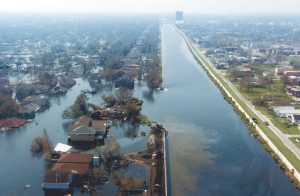 As devastating as Katrina was, the brunt of the damage was caused by the insufficient emergency relief response administered by the federal government. While the evacuation plan effectively allowed for the evacuation of those with access to automobiles, it failed to provide transportation to people who did not afford that privilege—majority of them being African Americans. Because the plan left behind thousands of people, their only options were to make it to the only emergency shelter in the city, the Superdome, or to wait to be rescued on the roofs of their flooded homes. 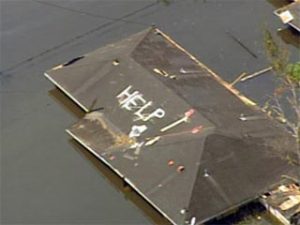 The storm hit at about 6:00am on Monday morning; Louisiana Mayor Ray Nagin opened the Morial Convention Center as a last resort shelter on Tuesday; buses did not arrive for evacuations until Thursday and were not completed until Saturday, with some people still stranded on the highways until the following Monday.

The slow governmental response, coupled with past negligence and discriminatory policies, provides extensive evidence that Hurricane Katrina was more than a “natural” disaster. Rather, the destruction caused by Hurricane Katrina should be understood as a product of environmental degradation, poorly managed protective infrastructure, ill-devised relief plans, and a segregated urban landscape. In the events leading up and responding to Hurricane Katrina, the devastation of lives, homes, and dignity occurred disproportionately in the city’s majority African American communities.

With Hurricane Laura’s catastrophic winds tearing through Texas and Louisiana, it’s vital to know and analyze the mistakes of the past in order to learn and promote more equitable responses for future disasters. As climate change accelerates, and natural disasters strengthen in intensity and severity, the government’s preparation and response to such events is ever more critical. Building sustainable communities that can weather intense storms requires efforts at all levels of government and necessitates engagement with community members to understand the unique needs of varying neighborhoods. Some residents believe New Orleans has made vast improvements with its flood systems and responses to storms since Katrina, however much work is still to be done, and much of that must start by acknowledging and redressing the harmful wrongs of 15 years ago. While New Orleans is out of the cone of impact from Hurricane Laura, it does not mean the Gulf city will be unaffected.