Home prices are rising across the country, and although this is happening at a slower pace than in previous quarters, the difference in prices can be a stark reminder of the challenges that first time buyers face when deciding where to live. According to the National Association of Realtors, “The national median single-family home price in the fourth quarter of 2018 was $257,600, up 4 percent from a year ago” (NAOR). These high price tags make something that was once a part of the American Dream become out of reach for many people. Luckily, certain metro areas offer more affordable options than other metro areas: 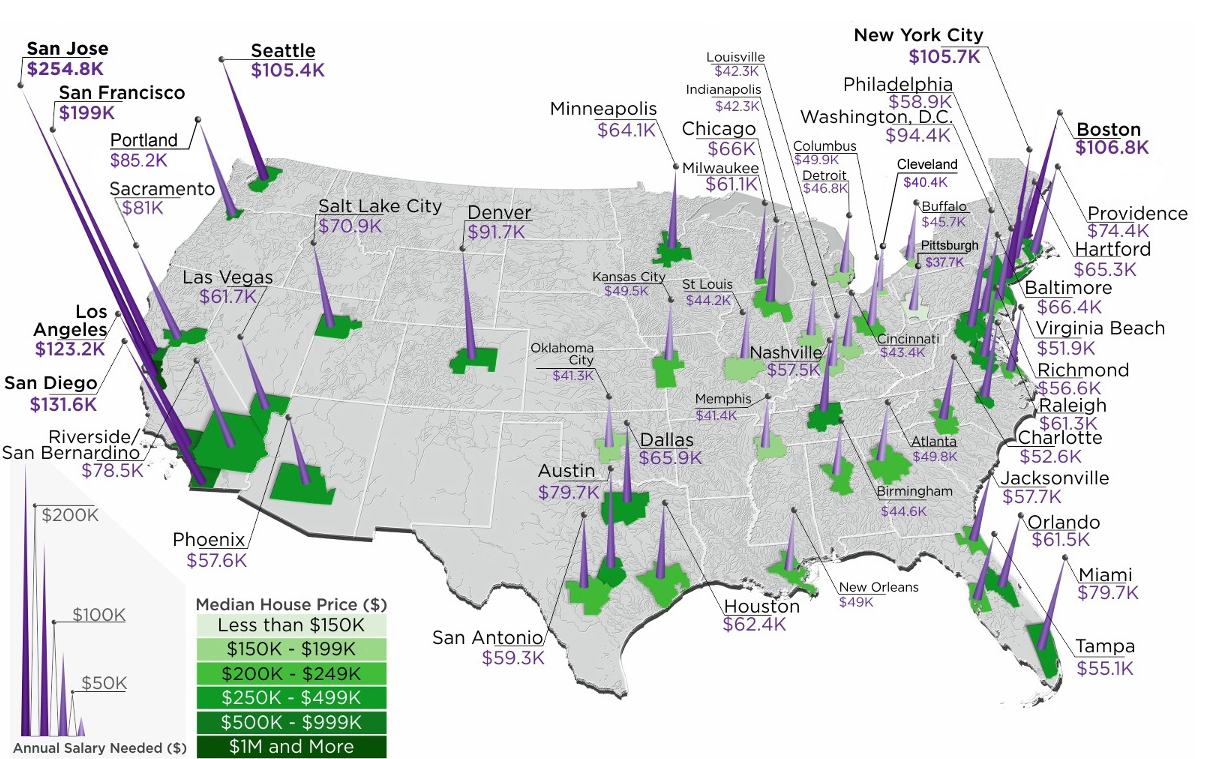 This map shows 50 popular metro areas in the United States and the median house price in those areas. The purple points on the map depict the kind of salary that would be required in order to live in one of these metro areas.

The national home-ownership rate has been steadily increasing over the past several years, now up to 64.8%. This rate has been gradually going up since when it hit an all time low of 62.9% home-ownership in the second fiscal quarter of 2016. In any of these cities (shown in the map above), there are neighborhoods with highly priced homes and also neighborhoods with homes of a lower price. The map only reflects the median value of a home, and the average salary that would be necessary to live in each respective city. Although not an exact indication, a map such as this one can be a great indication for people looking to buy homes. Depending on a person’s current salary, this map can show which places to live based on current income.

The Top 5 Metro Areas with the Highest Salary Required for Buying a Home:

As shown on the map, the most expensive metro’s in the U.S.A. are located around in Silicon Valley. This is in large due to that area’s tech based economy, which is currently a booming industry. The top four metros in terms of high salary requirements for buying a home are all in California!

The Bottom 5 Metro Areas with the Lowest Salary Required for Buying a Home:

These lower cost metros are a fraction of the necessary salaries to live compared to California’s high income metros. There is a trend amongst regions of the country where, “in general, metro areas in the Midwest and the South require lower salaries than metro areas on the West Coast and the East Coast.” (HowMuch) In terms of the nation overall, the median home price is $257,600 and the salary needed to live would be calculated as $61,453.51 as noted by HSH.com.