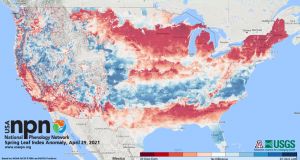 The above map depicts the arrival of spring across the United States. The leaf index anomaly is used to determine how early or late spring has arrived based on the typical and historical time of arrival. According to the data, spring arrived exceptionally early in the Southwestern United States, starting in mid January. This early trend continued until a wave of cold temperatures halted the progress of Spring’s arrival in mid-February, causing a late arrival amongst a large portion of the Southern States. The arrival of Spring was also exceptionally early for the northern portion of the country as well, especially in the Northeast and around the Great Lakes. 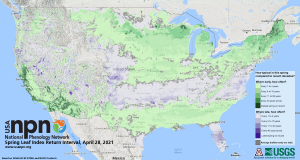 The National Phenology Network also categorized Spring 2021 based on how often these trends occur. This map shows how rare the early and late arrivals historically are. Based on the data, the early arrival of spring appears to be a fairly common occurrence, happening every 1-4 years. However, parts of California’s Western Coast experienced the earliest spring on record. The same trend is seen for the portions of the nation where spring arrived later than normal. This trend also appears to occur every 1-4 years, meaning this year’s arrival was not out of the ordinary.

To learn more about the Spring Leaf Index and the return of spring in 2021, visit the National Phenology Network’s Status of Spring webpage.