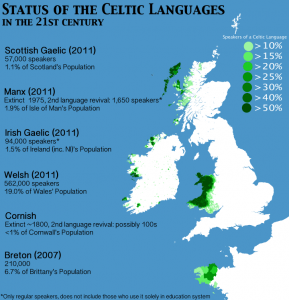 The history of the British Empire and colonialism allowed for the English language to spread to all four corners of the globe where it is now spoken natively by the majority of the population in the United States, the United Kingdom, Canada, Australia, New Zealand, and Ireland. English is also the primary natively spoken language in The Bahamas, Jamaica and many islands of the Caribbean, many with ties to the British Commonwealth of Nations. The influence of the United Kingdom around the world since the 17th Century has allowed for the depletion of many local and native languages, including those of the Celtic nations.

The Celtic nations are located in Western Europe and the North Atlantic and are where Celtic languages and cultural traits have survived. The six widely considered Celtic nations are Brittany, Cornwall, Ireland, the Isle of Man, Scotland, and Wales which each have their own native language, Breton, Cornish, Irish, Manx, Scottish Gaelic, and Welsh respectively.

This map posted on Brilliant Maps shows the modern distribution of Celtic languages in the 21st Century. The figures on the map only represent regular daily speakers and does not include those who use it solely in the education system. For example, in Ireland, the Irish language (Gaeilge) is a compulsory school subject from elementary school to high school. Wales has the most Celtic language speakers with 19% of the Welsh population able to speak Welsh. Irish is the national language of the Republic of Ireland but only 94,000 people speak the language regularly on a daily basis.

Brittany is a region in the extreme north-west of France where there are 210,000 speakers of Breton remaining. Cornwall is a county in the south-west of England. Historically, Cornish was spoken there but became extinct in the 1800’s but attempts are now being made to revive the language. A similar movement to revive the Manx language is present on the Isle of Man, a Crown dependency located in the Irish Sea between England and Ireland.

Although English is now the majority language in all of these nations, except in Brittany where French is spoken, movements are gaining momentum in efforts to make the unique Celtic cultures and traditions more present and relevant in the modern day. For instance,­­ Irish (Gaeilge) is now one of the 24 official languages of the European Union.