Student loan debt in the United States totals more than $1.7 trillion, but this debt is not evenly distributed throughout the states. According to the Education Data Initiative, among the 50 states, including Puerto Rico and the District of Columbia, federal student loan debt averages at about $29 billion per state. As of 2022, student loan debt is the second highest category of consumer debt, behind only mortgage debt, and higher than credit card and auto loan debt. The largest indebted age group is adults aged 25 to 34 years old.

Each map below depicts a different perspective of student debt per state (Education Data Institute). 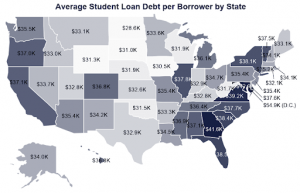 The average amount of debt that each student owes in different states is portrayed above. At $54,945 per borrower, students in D.C. have the highest average federal student loan debt. North Dakota is the only state where the average debt is less than $30,000. 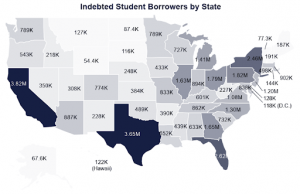 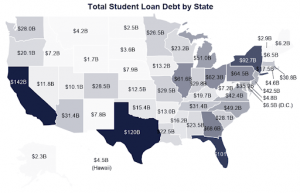 Overall, Texas and California have the most student loan debt. This can be attributed to the large populations in these states. 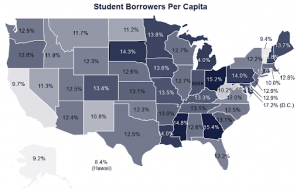 The percent of students who borrow loans per capita in each state is represented here. D.C. has the greatest number of student borrowers per capita, while Hawaii has the least.

Across sources, results are overwhelmingly similar. The map below from Fortune Education also showcases average student loan debt by state. From 2013 to 2021, Texas, Florida, Georgia, North Carolina, South Caroline, Louisiana, Mississippi, Arkansas, Delaware, and Nevada, saw an increase of at least 200% in the total amount of outstanding student loan debt. 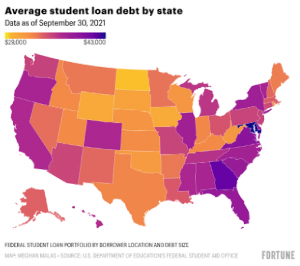 Different educational programs have different price tags associated with them, as seen in this graphic of student loan statistics from this Forbes article. Graduate school programs such as medical school and veterinarian school tend to require significantly steeper loans than an undergraduate engineering major for example.

What is the average student loan debt in your state? Check out the stats by going to the Education Data Initiative.