The Surging Seas Risk Zone Map is an online, interactive database that visually displays the interaction of Earth’s water and coasts by showcasing how projected sea level rise could affect certain areas. Created by Climate Central and launched in 2012 before Superstorm Sandy, the Surging Seas project was the first interactive, online map that presented sea level data and coastal flood risk information for the entire contiguous U.S.

For example, in the New York City region, users can cross-reference water level data with other socioeconomic factors such as social vulnerability, population density, ethnicity, income, property, and landmarks. Users can also adjust water levels in a given area and navigate around the map. The water levels shown are measured above the local high tide line instead of standard elevation. The highest water levels can be used as reference points for flood risk zones and tsunamis. The user can also toggle the scenario from extreme, moderate, or unchecked carbon cuts to see the spectrum of consequences our coasts may experience in the coming years due to climate change. 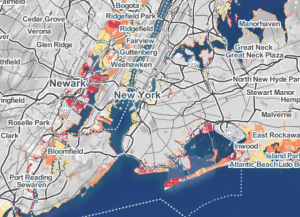 Global climate change has been observed to have raised global sea levels about 8 inches since the late 1800s and scientists are warning of the possibility of another 2 to 7 feet (roughly half a meter to 2 meters) of sea level rise by the end of this century. The combination of an accelerating rate of sea level rise, increased chances of storm surges, and extreme flooding is currently threatening vulnerable coastal regions and populations around the world.

Climate Central’s Sea Level Rise Zone Map emphasizes the need for accurate and high-quality data on both sea-level rise and resulting coastal hazards on a global scale. For more information and to see their other maps, click here.