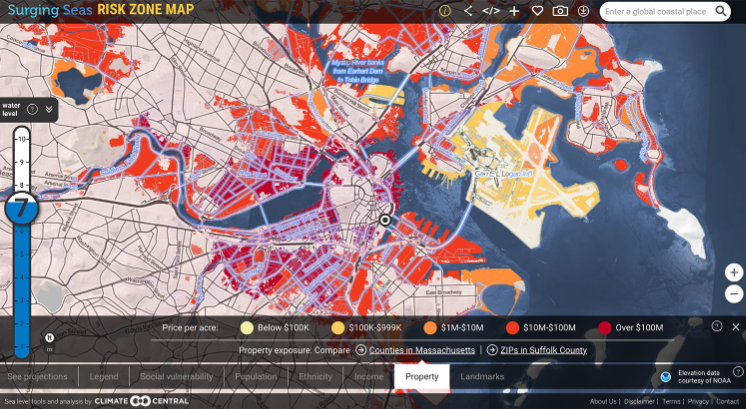 Sea level rise is a very real threat to modern life. Ignited by warming greenhouse gas emissions, these changing tides have become a major source of concern as they threaten to intensify storm surges, destroy marine habitats, and consume coastal societies. Furthermore, there is no certainty surrounding how they will shape our future. Yet, as emissions grow, the surface temperature of the ocean increases unlocking the water stored in ancient bodies of ice and effectively raising the global sea level. Many other complex systems are set in motion with these heat increases, however, sea-level rise is something that will affect coastal region globally, and is, therefore, a prominent area of study.

Although it is worldwide, sea-level rise will not occur uniformly along every coast. Various factors need to be considered when accessing the areas at greatest risk. These factors include the rate of global warming, the geophysical characteristics and the social characteristics of the region, all contributing to complicate the risk assessment of an area. This is where the Surging Seas Risk Zone Map comes into play.

Climate Central’s sea-level rise map factors in a variety of social and physical data to create a visualization of how society will be impacted by rising seas under various climate models. Viewers are faced with a detailed map of the globe, capable of searching for specific locations and exploring the coasts. A slider along the side enables viewers to select the severity of sea-level rise, observing scenarios of up to 30 meters global rise. Interactive black dots are scattered along the global coasts, giving estimates as to when the selected level of rising could occur at current pollution rates. If the world continues business as usual, New York City’s Battery Park could be submerged in 1 food of ocean water by 2060. To further understand the level of sea rise, you can toggle between different warming scenarios ranging from “unchecked pollution” to “extreme carbon cuts”, offering greater insight into the most at-risk areas. And if you want to know more, an in-depth description of how this tool function is included with a downloadable report.

Mapping the physical impacts is exploring only the very tip of this complicated threat. Climate Central’s map combats this by diving further into the social implications brought on by sea-level rise. “Social Vulnerability,” “Population,” “Ethnicity,” “Property,” and “Income” are all listed along the bottom. The viewer can toggle through and see how these factors change over the varying models of sea-level rise. Risks are measured through various factors and translated onto the map, with the majority of change concentrated around the vulnerable coastal regions. For example, social vulnerability is measured by “low,” medium,” and “high,” while color-coded in yellow, orange and red. These shades mark where communities are most at risk of the threats of climate change, with area increasing as the model is projections become more severe.

Finally, historical sites are recorded on the map under the “Landmark” tab. Highlighted here are a selection of societal structures, sorted as hospitals, museums, civil servant establishments, government buildings, educational buildings, power plants, religious establishments, and military property, represented through coded symbols. In effect, the Climate Central’s map has attempted to define the basic pillars of the community in order to better encapsulate sea level rise’s impact on humanity.

However, the true nature of climate change is shrouded in uncertainty. Sea level rise is simply one aspect that will further offset the balance of nature and unload a cascade of responsive effects onto the environment. Moreover, humanity may be full of this map, however, it is solely one part of this Earth; one must not forget about the havoc climate change and wreaks upon the non-human. This only increases the call to action as the environment is one to save for the preservation of all life. 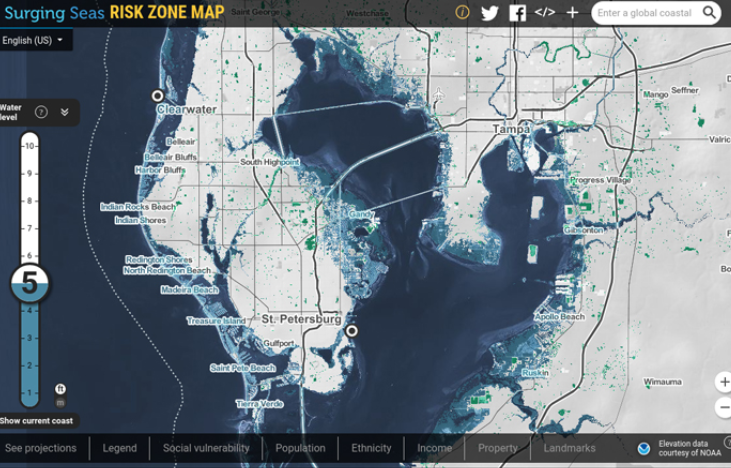