Plastic has been a topic of ongoing discussion over the last few years. As plastic pollution becomes a growing concern across the world, many countries and organizations have taken efforts towards reducing the use of plastic. One tactic that some countries have adopted is a country-wide ban on plastics.

In the United States, there are varying stances in addressing the legality of banning certain plastics. While some states support the banning of certain types of plastics, such as single-use plastics, others do not. Some states have enacted laws to ban plastics state-wide. Other states have adopted legislation to stop any future attempts at banning plastics. Some only have local bans or fees in place. The map below visualizes the different positions by highlighting the legislation that exists within each state. For the purpose of this article and map, the use of the term “plastic” refers to types of single-use plastics such as carryout containers, straws, bags, and styrofoam. 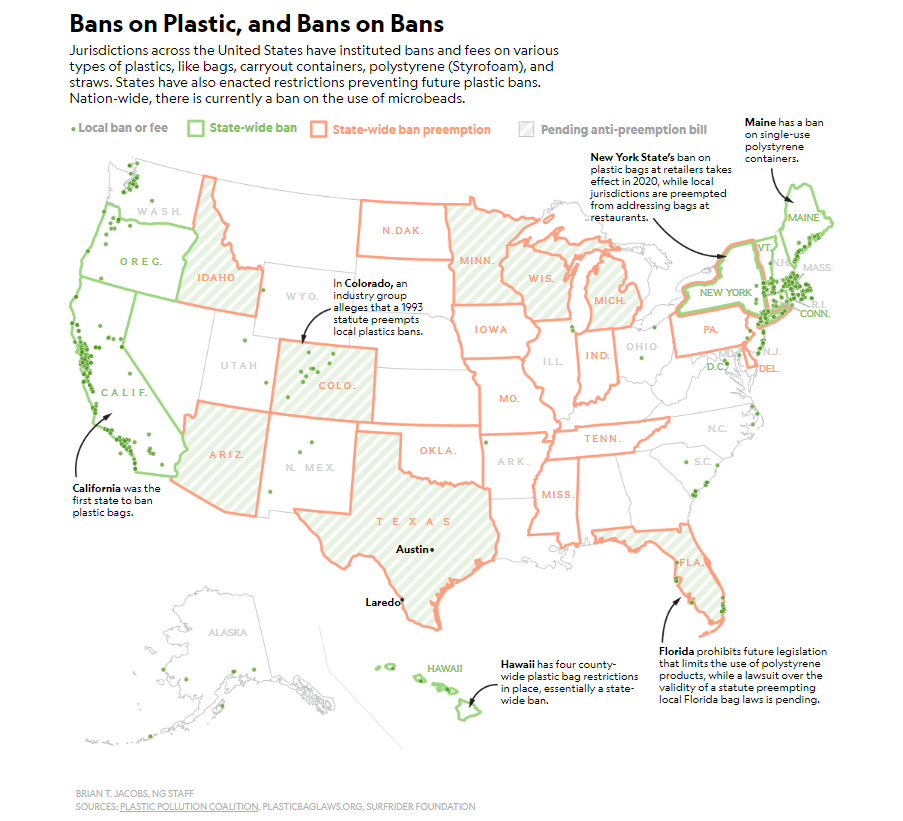 In order to fully understand this map, consider the below definitions of “preemption,” the keyword in the map’s legend.

In this setting, the term “preemption” is applied as a legal definition. Preemption means that if previous legislation on a subject matter has already been established by Congress, then it will precede state laws and/or preclude the state from adopting laws surrounding the same subject. Keeping this definition in mind, let’s take a look at the legend and break it down.

State-wide ban preemption
The legend designates states outlined in orange as having a state-wide ban preemption. This means that the state has previous legislation that prevents any new laws concerning plastic to be adopted. To put it simply, these states have bans on banning plastic. Many of the bans were enacted in an effort to create state uniformity when it comes to dealing with plastics. Some of these states include North Dakota and Iowa.

Local ban or fee
Green dots are used to signify the presence of local bans or fees on plastics in districts within a state. There are a few states that have these green dots and nothing else since they don’t have any state-wide laws regarding plastics. Utah and Ohio fall into this category. It’s important to note that these dots may be found within states that are outlined in green as well. This means that different parts of the state might have different bans depending on the district or city. California and Hawaii are outlined in green and contain green dots.

As demonstrated by the map, many states have an ongoing conflict over whether it’s legal to ban plastic.

The plastic industry has played a major role in the legal battle over bans on plastic. Groups like the American Progressive Bag Alliance, which is affiliated with the plastics industry, and many others, partner with local restaurants and retailers to provide information about how plastic bans could negatively affect them. Further, they are often seen advocating for the passage of ban preemption bills. When these bills don’t pass, they turn to support fees on plastics rather than banning them altogether.

Ultimately, banning plastics has become increasingly complicated as each state enacts its own legislation to address the issue.