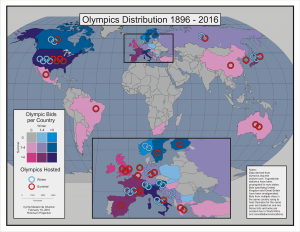 The Summer Olympic Games are underway in Tokyo, Japan! This marks the second time Tokyo will host the event; the first time was in 1964.

2021 is the fourth time in history that the Olympics were postponed. In 1916, 1940 and 1944, the games were all postponed due to the First and Second world wars. The Olympics were still held through the tense time following the September 11th, 2001 terrorist attacks and the tragedy at the 1972 Munich Olympics where 17 people died after the quarters of the Israeli team were stormed by Palestinian terrorists.

Hosting the Olympics is no easy feat. Every Olympics since 1960 has severely gone over budget. The Winter Games routinely go less over budget (with 2014 Sochi as an outlier) due its smaller nature and multiple sports being competed in the same venue. Cities sometimes withdraw their bids throughout the process due to high costs, but even the research to develop a bid can cost a city millions of dollars. The Council on Foreign Relations notes “The cost of planning, hiring consultants, organizing events, and the necessary travel consistently falls between $50 million and $100 million.” Recently, Tokyo spent upwards of $150 million for a 2016 bid, which they lost to Rio. To bid for the 2020 Games, it cost them additional millions of dollars in research.

In 1972, Denver became the first city to deny its selection to host the games when a referendum was passed by voters refusing public spending on the games. Residents of Denver also worried about the toll hosting the games could take on the beautiful Rocky Mountains.

The graphic below shows the percentage of cost overruns for some of the most recent games. 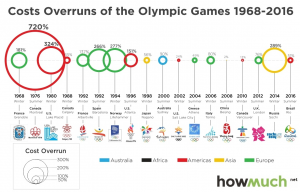 Studies show that there is very little to no benefit in the short or long term for a city to host the Olympics. The IOC requires cities to construct infrastructure they cannot necessarily care for and support in the long term. For example, the IOC requires 40,000 hotel rooms for the Summer Games . For Rio in 2016, that meant constructing 15,000 more hotel rooms. Originally, these rooms were supposed to be made into luxury apartments following the games, but many now sit vacant.

This Aquatics Building in Rio was supposed to be made into two schools following the games, but this is how it looks today: 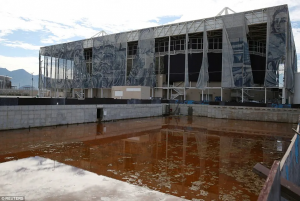 This article from USA Today shows more incredible images of abandoned Olympic infrastructure throughout the world.

One of the most successful stories of repurposing of Olympic infrastructure was in Sydney after the 2000 games, where a suburb grew around the Olympic Village following the games and the venues still get used for local soccer, cricket, and rugby games.

Where does this leave the fate of future games?

Many believe that the current bidding process encourages this overspending by rewarding cities with the most extravagant plans. To combat this, the IOC has released its “New Norm” plan. The “New Norm” includes 118 ambitious reforms to the way the Olympic Games are run. Here are some examples from the IOC of the “New Norm” in practice in the next two summer games:

As the next Olympic Games are planned, the “New Norm” aims to assure more support for cities as well as a more sustainable experience.

For further reading, here’s a piece from the New York Times Magazine about the costs of hosting the Olympics.