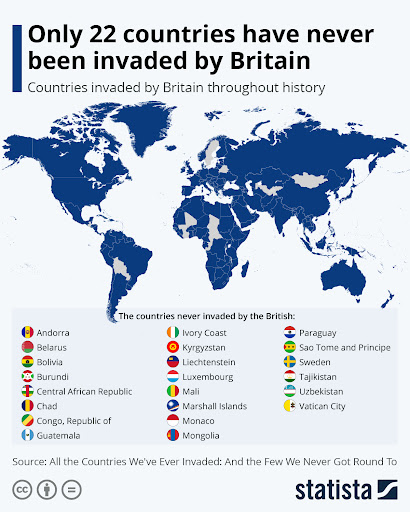 The British Empire, in its various iterations, is often considered one of the longest-lasting Western empires in the history of the world. At its height, almost a quarter of the world submitted to British rule. In fact, in 1920, the empire spanned nearly 24% of the total land area of the Earth. Over the course of its history, Britain has invaded almost 90% of countries around the globe. According to findings outlined in a new book written by Stuart Laycock, All the Countries We’ve Ever Invaded: And the Few We Never Got Round To, there are only 22 countries that Britain never invaded.

To gather the necessary data for his book, Laycock sifted through the historical accounts of every country in the world, alphabetically, searching for records of any British incursions. Although most countries on the list never became official members of the empire, all of them suffered some amount of military presence on their territory, either by way of force, threat of force, payment, or negotiation. Incursions carried out by British pirates, privateers, or armed explorers were also included in Laycock’s analysis.

The list of countries who achieved this insurmountable feat of avoiding British rule include:

Although the British empire did not rule the entire world, its warfaring efforts only spared a precious few countries across the globe. Of the 22 countries that somehow managed to escape the British empire’s reach however, Laycock believes at least some of them, such as Mongolia, did in fact host British invaders, but a lack of historical evidence to back up this hunch keeps them on the list. Was your country spared from British invasion? Take a look at this map to find out!