In the United States alone, the Chinese restaurant business is worth $20 billion and has an annual growth rate of 2.7%. 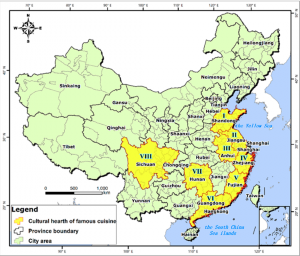 This map shows the cultural hearth of eight famous Chinese cuisines to understand the influence geographical environments and historical heritages have on regional food preferences.

Southern China, situated near south of the Yangtze River, is a subtropical climate, with warm temperatures, heavy rain, and high humidity influencing the food environment  i.e., rice, tropical fruits and vegetables (pineapple, lychee, oranges, and bananas). Thus, most dishes include rice and seafood with a wide variety of vegetables, steamed or stir-fried. Cantonese cooking, a part of Southern cuisine, is well recognized for its subtle and light flavors and freshness of ingredients.

Northern China has extreme winter temperatures below freezing whereas summers can have intense heat and rain. In the midst of plains, hills, valleys, and rivers, wheat and corn mostly prevail as staple agricultural products. The manufacturing of wheat-flour for noodles, stuffed buns, dumplings and steamed bread have been a part of the Northern diet for centuries. Northern Cuisine is typically strong in flavor, with salt and seasonings. These dishes are richer in red meat, oil, garlic, and scallions. Chinese dumplings and Peking duck are renowned as traditional delicacies of the North.

Also situated near Yangtze River, the Eastern region of China hosts fertile alluvial plains with rich agricultural crops like rice, and vegetable production. Furthermore, the presence of innumerable lakes and river tributaries, as well as proximity to the sea, affords the Eastern cuisine an abundance of seafood. Jiangsu cuisine and Zhejiang cuisine are two examples of Eastern cuisine built on the dependency of fish and crustaceans, defined with light, mellow flavors, and fresh cooking.

Western China encompasses Xinjiang Province and Tibet. This region consists of varying altitudes, temperatures, and rainfall, providing a great diversity of crops. One of the most recognized cuisines of the Western China is Sichuan because of its heat and spiciness. The use of Sichuan Pepper and Chili Oil came into practice to protect the food from excessive humidity, reducing the dampness of food while adding a unique dimension of flavors. Fish and beef dishes are popular, however a main attraction of this cuisine is the commonly known Kung Pao Chicken.

Chinese food culture was introduced to North America by early immigrants. Starting from food carts, Chinese restaurants have become a major culinary attraction over time. And indeed, the taste for Chinese cuisine has seized the hearts of people all around the world. Most metropolitan cities have Chinatowns – neighborhoods with high concentrations of Chinese immigrants and varieties of Chinese restaurants. As of 2021, the global Chinese food industry was valued at over $579.07 billion, with about a 7% annual growth rate which is expected to reach $914.09 billion by 2027. For thousands of years and through generations of evolution and fusion, Chinese cuisine has been celebrated for its ethnic flavors, freshness, and even medicinal benefits.