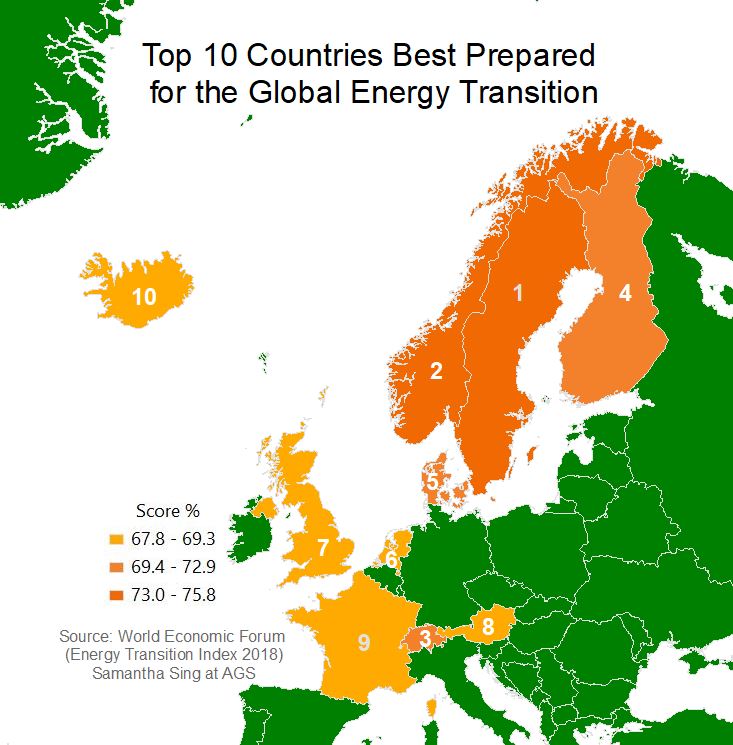 Today, the world is in the grips of an ongoing energy transition. This change is being brought on by demand and supply shifts, innovation, and environmental concerns.

As the world population increases drastically, so does the demand for energy. Global energy consumption is expected to increase by 30% from 2017-2040. Energy security and universal access to energy, therefore, will become an imperative. Innovation can help with this as we make the transition from traditional energy sources such as coal to newer alternatives such as liquid hydrocarbons.  Developing technology that changes the relationship between consumers and suppliers and human capital development will open up new frontiers for the future of energy system. Going forward, environmental concerns will intensify the implications of energy system reliability and fuel diversity planning.

The World Economic Forum’s Fostering Effective Energy Transition Report assesses the energy systems of 114 countries.  A country’s overall energy system performance or scores are based on their energy security and access, environmental sustainability, and economic development and growth. Countries are also assessed on their transition readiness, which measures the future preparedness of a country’s energy systems. The Energy Transition Index shows that of the countries evaluated, 43 countries have shown high-transition readiness.  These “leading countries” are typically more advanced in terms of environmental sustainability, especially in making improvements in carbon emissions. Most of the countries best prepared for the energy transition are in Europe; in Norway, carbon emissions are relatively low due to almost all their energy being generated from hydropower. Countries that are considered “emerging” such as Iran and Venezuela are showing improvements in the reduction of fossil fuel subsidies, improved energy access and quality of supply. Pressure is high for low-performance countries to compete with these countries as they struggle largely around environmental stability.