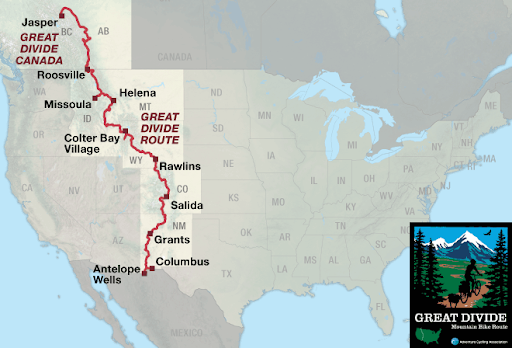 Are you a cyclist and looking for an adventure? The Great Divide Mountain Bike Route (also known as GDMBR) may be your challenge! GDMBR is the longest bike trail in the world. Spanning 2,700 miles from Canada to Mexico, the route passes through dirt roads, rural towns, ranchlands, hills, and deserts of five American states and two Canadian provinces. What makes it a true challenge is that only 10 percent of the trail is paved, and the rest is off-road – mountain and off-road bikers may have an easier time navigating the trail.

Most people who take on the challenge ride the route north to south (from Banff, British Columbia to Antelope Wells, New Mexico). Typically, it takes about six to ten weeks to complete the ride. In 2016, rider Mike Hall set a record time of completion by finishing the ride in 13 days, 22 hours and 51 minutes. The route will take riders through remote areas where riders are often met with wild animals like grizzly bears. At times, riders might have to go one to two days without food or water.

The legendary GDMBR is quite old and was completed in 1997 by the Adventure Cycling Association. The Association continues to run the route and regularly updates maps and guidebooks for people who want to take a journey on the GDMBR.