With the polluted skies, deadly heat waves, destructive flooding, sweeping forest fires, and more, the state of planet Earth is dragging at geographers and mapmakers’ minds lately. The Human Reach, created by Esri’s StoryMaps team, investigates and visualizes the human behaviour behind such global pressing concerns. The map looks at the global scale impact that human activities have on planet Earth as well as how that impact is unevenly distributed.

The map has five sections: Density, Urbanization, The Earth at Night, Networks, and Human Footprint. The Density section addresses the impressive growth of the human population. In 2021, more than 7 billion people crowded the planet, however, in 1950 that number was only 2.56 billion. At this rate, by 2050, the human population is projected to reach at least 9.77 billion. An increase in population density like the one we have already and will continue to experience, will profoundly exacerbate humanity’s reach on the planet’s natural resources. At first, The Human Reach demonstrates population density with a series of human figures. More figures illuminate as the user progresses down the timeline. 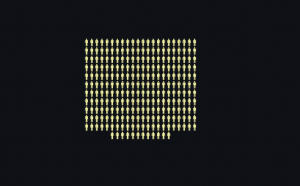 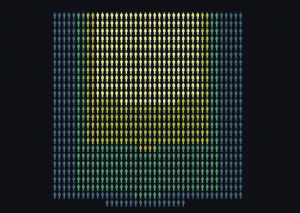 Then the map explores how this growing human population is unevenly distributed across our planet by allowing the user to travel around the globe. The map compares places like Southeast Asia where more than half of the world’s population lives to vast regions that have harsh conditions to live in like the Arctic Tundra. Likewise, this section also heavily emphasizes how past and future climates have and will influence this movement. Historically, humans have settled in moderate and resource-rich areas, but with a changing climate, mass migration will become far more common. For example, with the Sahara expanding southward, those who have farmed the Sahel for centuries will be pressured to migrate. 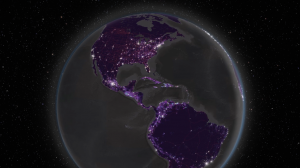 A natural step from Density, the story map then explores Urbanization, highlighting humanity’s unique trend of settling in urban areas. Urban regions are expanding alongside population growth and The Human Reach story map uses São Paulo’s sprawling story to illustrate this (shown below is São Paulo ins 1905 versus the 2010s) 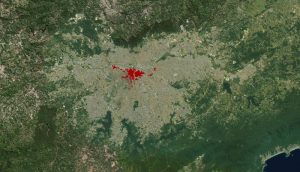 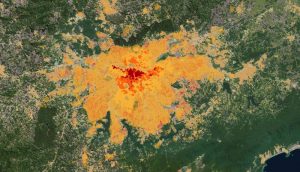 The Urbanization section also includes a globe with yellow spikes, each representing the relative populations of cities with more than 300,000 inhabitants allowing the user to visualize the trend of Urbanization around the globe. While cities are significant sources of air and water pollution, the concentration of people has been observed to alleviate pressure on natural landscapes. 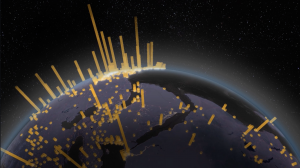 In the same way as populations, urban areas are also unevenly distributed. Europe was the first region to experience urban transformation in this way as the industrial revolution pushed people from rural farms to urban factories. Today, three-quarters of Europe’s population lives in cities. China’s transformation ensued later. Massive migrations out of pastoral livelihood into metropolitan areas with economic opportunities drove China’s urban population from only 16 percent in the mid-20th century to 56 percent in 2015. The Human Reach also recognizes that Urbanization is not identical everywhere. For example, in Africa, only 38 percent of its population south of the Sahara live in cities. However, the world’s ten fastest-growing cities are all located in Africa which will have an intriguing influence on Urbanization in the future.

As the world becomes more and more urbanized, what The Earth looks like at Night has become dramatically altered. The Earth at Night is the third section of the Human Reach Story map, showing how the sky, formerly bright from only the moon, stars, lightning, and bioluminescent organisms, has been corrupted by the overpowering glow generated by urban centers. While the source of light population, the story map also rewards bright cities for being unintentional maps of human history. Lights from cities draw the 19th-century railroad routes of the midwestern United States as well as the life that gathered around the Nile to escape the harsh Sahara. 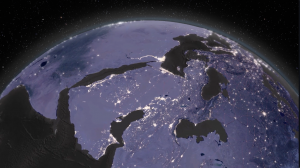 The emerging patterns of history seen in The Earth at Night feed directly into The Human Reach’s fourth section, Networks. In Networks, The Human Reach emphasizes that humans are separate populations, cities, and urban centers but are also exceedingly interconnected. While humans are distributed far and wide around the globe, transportation, roads, communication systems, global economies, exchange of goods and services, and other networks tie them back together. The Human Reach illustrates this by exploring roads, air routes, shipping routes, and fiber optic cables. The map first looks at the densely interconnected roads across the world (highlighted in red below). Among the 20 greatest road dense nations, The United Kingdom has 99.5 miles of road (160 km) per 62 square miles (100 square km).The map then highlights how airline routes connect urban centers across vast spans of ocean. In 2018, 4.4 billion people boarded a commercial airliner. The map emphasizes that while our network of air routes is convenient, the emissions and carbon footprint released can not be overlooked. Shipping routes and fiber optics cables are the other networks that The Human Reach describes as “lifelines’” for the current global economy, livelihoods, and more. 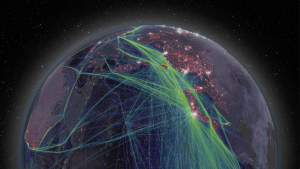 Thanks to data from The Wildlife Conservation, the final section of The Human Reach came into fruition. The Human Footprint studies the cumulative extent of all human activities. Using a color scale, with a darker purple being smaller human impact and lighter yellow being greater human impact, The Human Footprint visualizes the distribution of intensities of human activities. To create this gradient, the map considers factors like population density, land transportation, electrical power infrastructure, modified landscapes, and more. Dramatic comparisons emerge in places like Australians outback versus its coastal cities and South Americans Amazon basin versus its coastal communities. As conversations about climate instability broaden, it is important to be inclusive and remember that human impact or Human Footprint is unevenly distributed, with some more responsible for negative effects than others. 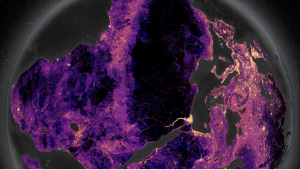 The Human Reach story map finishes by posing the question: “At what point does the human demand on Earth outpace the planet’s ability to support our species and those we live alongside—or have we overextended our reach already?” Many think we live in a human-dominated epoch, which climate scientists and geographers call the Anthropocene. Humanity, in varying degrees, has conquered, probed, and impacted almost everything on Earth, driving global climate change. And as illustrated in this story, these trends of population growth, urbanization, networking, and human impact are nowhere near slowing down.

Across all sections of this story map, the user can interact and grasp at their own pace the impressive and threatening nature of Human Reach. In a time where discussions on human influence and climate instability as well as debates on topics like the Anthropocene are more important than ever, story maps like The Human Reach encourage visualizing global issues to help tease out solutions. The Human Reach, once again, proves maps, especially visually engaging ones like this one, are key to challenging and changing world issues.