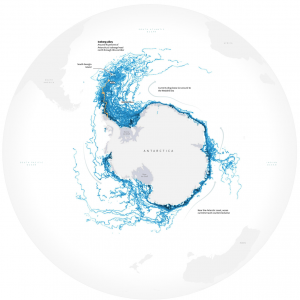 In the map above, illustrated by Reuters, the paths of wayward icebergs originating from Antarctica are visualized. The peculiar blue paths represent the journeys of longevity of each iceberg. Immediately, we can see that the paths of icebergs are influenced by ocean currents, with most flowing in predictable directions –  most are small and stay close to the coast or float into the Weddell Sea. With that being said, one iceberg’s travels are emphasized in particular: a behemoth “monster berg” named A68a.

Breaking off Antarctica in July of 2017, iceberg A68a was coined as the world’s largest iceberg—for good reason too. Being approximately 100 miles (160 kilometers) long and 30 miles (48 kilometers) wide, the iceberg was larger than 66 countries and territories, including  Liechtenstein, Cape Verde, Singapore, and Samoa. The longevity of this iceberg was also quite notable, slowly traveling across the Weddell Sea for a couple years before moving dangerously close to South Georgia island in 2020. This movement caught the attention of many scientists, who were tracking the iceberg’s whereabouts, many of which were interested in documenting and observing the potentially catastrophic effects the iceberg would have on a small island such as South Georgia. This island, which is a notable breeding ground for seals and penguins, would be adversely impacted by the iceberg if a collision were to take place. For instance, if the iceberg were to crash into the island, it may have obstructed many of the island’s 2 million penguins from reaching the ocean, keeping them from being able to feed their young. Another major concern raised by scientists was the release of copious amounts of fresh water into the ocean ecosystem. Such a release of freshwater could kill local phytoplankton, catastrophically disrupting the food chain, and would add to already rising sea levels.

Thankfully, the final outcomes were less dire than expected for A68a. Like the fate of most icebergs, A68a eventually thinned out to the point of breaking off into many pieces and  eventually melting into nothingness. Scientists still documented the impacts of freshwater on the local ecosystems, which they found to be minimal, partially due to the coincidence of krill (which are directly above phytoplankton in the food chain) having a particularly bad year in terms of population.

With all things considered, it is important to understand the impacts icebergs like A68a can have on their local ecosystems. Although the threat of A68a has passed, climate change will potentially afford similar events to occur, perhaps with more consequential endings. Fortunately, maps such as these allow scientists to study the patterns in which they can expect the path of icebergs to follow.