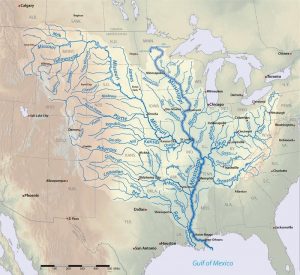 Originating from a minuscule outlet stream at Lake Itasca, the Mississippi River begins its journey through the continental climate of Minnesota before meandering 2,350 mi (3,766 km) south to the subtropical waters of the delta southeast of New Orleans and into the Gulf of Mexico.

The Mississippi River is well known for its great length. The river splits the border between 10 U.S. states, and is one of the longest rivers in North America, second only to the Missouri River, one of its tributaries. Although it is common to see the Mississippi listed as the fourth longest river in the world, it is because the length of the Missouri-Jefferson (Red Rock) system is added on – for a combined length of 3,710 mi (5,971 km).

Oftentimes, that is where the discussion ends. An overlooked point of conservation is the watershed that accompanies the Mississippi on its route to the coast.

Officially titled as the Mississippi/Atchafalaya River Basin (MARB), the watershed covers over 1.2 million sq mi (3.1 million sq km) and is the third largest in the world, following the Amazon and Congo basins. Flowing waters from 31 states plus two Canadian provinces drain into the Mississippi River. The basin’s land area encompasses 41% of the contiguous United States and 15% of North America.

Aside from being the largest drainage basin in the U.S., the Mississippi provides the nation with water resources that contribute to the well being of America’s history, commerce, tourism, and fishing industries.