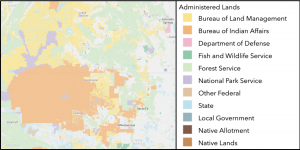 One interactive tool created by the Bureau of Land Management allows users to see how these public lands are divided administratively. Zooming into the map shows just how interconnected these federal agencies are, with six separate agencies — The Bureau of Land Management, Bureau of Indian Affairs, Department of Defense, Fish and Wildlife Service, Forest Service, and National Park Service — managing land in the four corners region. This mosaic of public lands illustrates the history of development in the western United States. Because, although there remain public lands in the eastern United States, there’s a clear difference in the agencies in charge across regions. For example, there is a clear increase of lands managed by agencies focused on natural resources as you move toward the west coast. 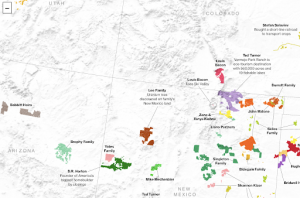 The western United States was incorporated into the country with a stronger focus on conservation due in large part to efforts by Theodore Roosevelt and the founding of the National Park Service. For example, of the first 15 National Parks established in the U.S., the only one created east of the Mississippi was Acadia National Park, the 15th park. This is not to say that there are no places worthy of preservation in the eastern United States, but rather indicative of the impact that private lands have on preservation. When the government seeks to establish a National Park Service Unit on private lands, it must do so through eminent domain, which is the right of government or its agent to expropriate private property for public use, with payment of compensation – an example being Shenandoah National Park in Virginia. Because the majority of the western United States had not been settled through the leasing of private lands, the government was the sole proprietor of much of the newly gained land out west, meaning they had an easier time establishing public lands without using eminent domain. It is important to note that while the federal government did not require the use of eminent domain in establishing public lands in the west, they did however dispossess Native Americans of their lands through broken treaties. Therefore, when discussing public lands, it is important to understand the different ways land in this country has been gained and interacted with.

To those who wish to understand the mosaic of private lands in the United States, an interactive map via Bloomberg shows the top 100 landowners in the United States. A similar view of the private lands in the four corners region shows how America’s elite land owners are increasing their influence over the region—where the plentiful natural resources are fair game outside of public lands.